December 1, 2017 by Samuel Warde No Comments 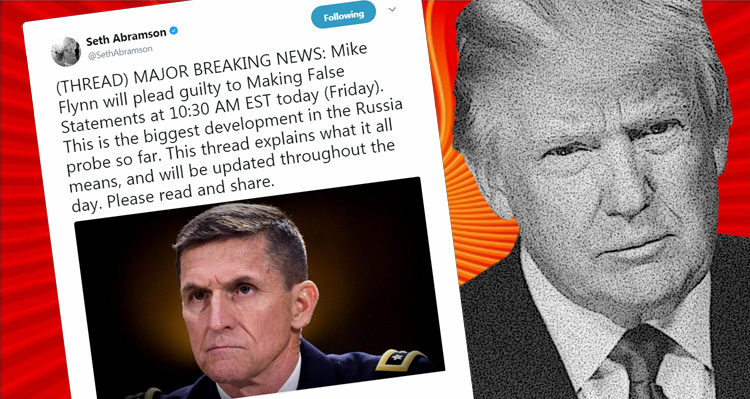 Attorney and University of New Hampshire professor Seth Abramson has been publishing extensive tweets regarding the Trump-Russia conspiracy for months now; and, while he has his critics, he has been correct on most of his assessments.

Abramson – a former public defender – has an impressive resume. As his website notes:

That guilty plea has been confirmed by Special Counsel Robert Mueller’s office. As CNBC reports:

The retired Army lieutenant general is expected to plead guilty to a criminal information charging him with a single count of knowingly making materially false, fictitious and fraudulent statements to FBI agents.

Abramson’s thread is below and we will relate a few highlights.

(THREAD) MAJOR BREAKING NEWS: Mike Flynn will plead guilty to Making False Statements at 10:30 AM EST today (Friday). This is the biggest development in the Russia probe so far. This thread explains what it all means, and will be updated throughout the day. Please read and share. pic.twitter.com/z2VxUJ89Or

Abramson begins by noting that “This is the biggest development in the Russia probe so far.”

Below are Abramson’s first nine tweets. His thread is ongoing and has reached 30 points thus far.