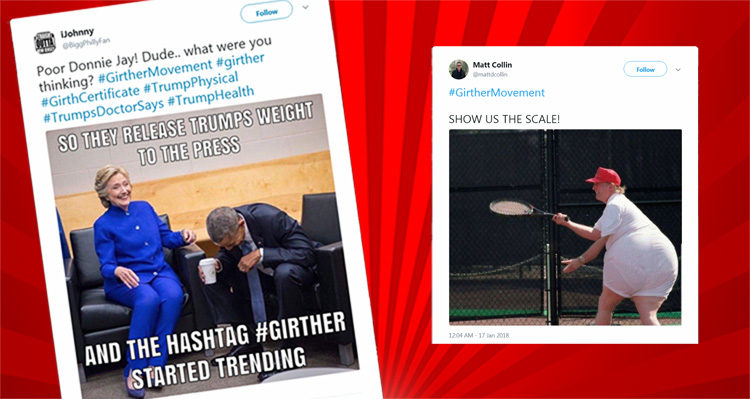 Trump’s recent physical sparks  “girther” debate over his true height and weight – with one Hollywood filmmaker offering $100K for charity if Trump will be publicly weighed.

Controversy has erupted in the wake of the release of details surrounding Trump’s annual physical.

The physical for 71-year-old Trump was performed by Dr. Ronny Jackson last Friday at the Walter Reed National Military Medical Center in Maryland.

CNN reported that Trump weighs 239 pounds and standing at 6 foot, 3 inches, that puts him just barely below the “obese” range on the body mass index (BMI) chart.

Since 2016, when Trump last released medical information, his overall cholesterol levels have increased from 169 to 223. The so-called “bad cholesterol” is now at 143, up from 94 during his last exam. And his blood pressure, at 122 over 74, is considered elevated.

“If you look at the areas where Dr. Jackson focused, on heart disease, which is understandable given the President’s age, basically all of the numbers, the objective numbers that we could compare this year to last year, have become a little worse,” said Dr. Sanjay Gupta, CNN chief medical correspondent. “He is gone in the wrong direction, and we’re seeing now the impact in these particular tests of his lifestyle.”

Sky News reported that Trump’s physical, which had been hoped to quash questions regarding his ability to serve as president, “has spawned a movement of people who believe Mr Trump may have fudged his height so he could avoid being assessed as obese.”

Referencing the phrase “Girther Movement,” a reference to Trump’s leading role in the “Birther Movement,” Sky News reported that although Navy doctor Ronny Jackson “reported that Mr Trump was 6′ 3” and 239 pounds… a copy of his driving license issued in May 2012 – published by Politico after an open records request [showed] Mr Trump is 6′ 2”.”

“It may only be an inch but it is the difference between an overweight BMI or an obese one, which according to the NHS is 30.6 and above.” [Trump’s BMI came in at 29.8 – making him overweight, but not obese.]

Continuing, Sky News reported that “Guardians of the Galaxy filmmaker James Gunn is among a number of people who have demanded Mr Trump be weighed in public.”

I will give 100 thousand dollars to Trump's favorite charity if he will step on an accurate scale with an impartial medical professional, okayed by both of us. For real. #Girther #GirtherMovement

Others took to twitter to mock Trump’s alleged height and/or weight by comparing Trump to other famous figures known to have similar specs.

Something isn't adding up. pic.twitter.com/AEBIwmbFsg

We want an ACCURATE weight. pic.twitter.com/vmp9QyjVxy

I'm officially part of the #GirtherMovement

Dotard is the same as these athletes? pic.twitter.com/fp6zFlOYfr

If Kushner is 6ft 3.2in (per internet), then Trump is less than 6ft 3in (based on photos). Likely 6ft 2in (as on his driver's license) or less. Trump's BMI (assuming 239lbs is true) qualifies as "obese" even up to 6ft 2.9in. #girther #GirtherMovement #GirthCertificate pic.twitter.com/M67hYcK1xd