The New Yorker Delivers A Hilarious Knockout Punch To Trump 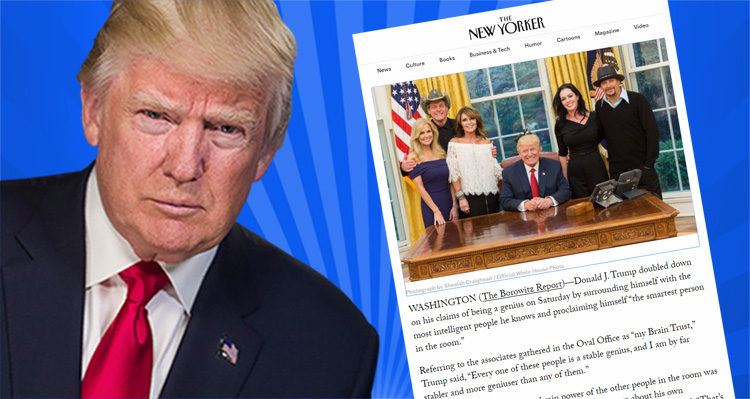 All hell has broke loose over the weekend in the wake of the Friday release of Michael Wolff’s “Fire and Fury: Inside the Trump White House.”

Trump took to his Twitter on Saturday morning, posting a 3-part series of tweets addressing those concerns and defending his intellect:

Now that Russian collusion, after one year of intense study, has proven to be a total hoax on the American public, the Democrats and their lapdogs, the Fake News Mainstream Media, are taking out the old Ronald Reagan playbook and screaming mental stability and intelligence. Actually, throughout my life, my two greatest assets have been mental stability and being, like, really smart. Crooked Hillary Clinton also played these cards very hard and, as everyone knows, went down in flames. I went from VERY successful businessman, to top T.V. Star to President of the United States (on my first try). I think that would qualify as not smart, but genius….and a very stable genius at that.

New York Times best-selling author and comedian Andy Borowitz was quick to respond, taking to his column – The Borowitz Report – with a brilliant and humorous faux report.

.@BorowitzReport: Trump: I Am the Smartest Person in the Room https://t.co/unOrrgJaXQ

Borowitz began with a reference to Trump’s Saturday morning Twitter-Tirade, defending his questionable intelligence, writing that Trump then “doubled down” on his claim of being a genius “by surrounding himself with the most intelligent people he knows” and proudly “proclaiming himself ‘the smartest person in the room.'”

Referring to the associates gathered in the Oval Office as “my Brain Trust,” Trump said, “Every one of these people is a stable genius, and I am by far stabler and more geniuser than any of them.”

Trump said that the collective brain power of the other people in the room was proof of how smart he was. “Anyone who was insecure about his own intelligence wouldn’t surround himself with such smart people,” he said. “That’s why you never saw people like this in the Oval Office when that dummy Obama was President.”