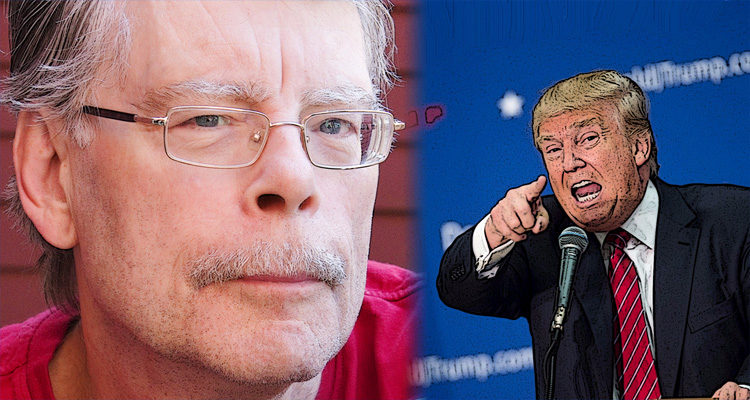 Monday morning, King took to his Twitter account, tweeting about the upcoming State of the Union Speech.

“Set aside for a moment that Trump is a narcissistic, bad-tempered, lazy, and unprepared president, and consider this: the State of the Union is about to be given by a sexual predator who lost the popular vote by almost 3 million votes,” he tweeted.

Set aside for a moment that Trump is a narcissistic, bad-tempered, lazy, and unprepared president, and consider this: the State of the Union is about to be given by a sexual predator who lost the popular vote by almost 3 million votes.

King isn’t the only one expressing concern about Trump’s Tuesday speech.

Author and activist Amy Siskind tweeted the following alert to the media covering the event:

“Media, let’s break the cycle: * Trump reads a speech off a teleprompter and doesn’t puke on himself * media coverage says wow, so presidential * next morning he returns to himself * the rest of us save your tweets/headlines and remind you how ridiculous you look,” she tweeted.

* Trump reads a speech off a teleprompter and doesn’t puke on himself
* media coverage says wow, so presidential
* next morning he returns to himself
* the rest of us save your tweets/headlines and remind you how ridiculous you look. #SOTU

Additionally, a group of anti-Trump celebrities are slated to participate in a “People’s State of the Union” rally.

Mark Ruffalo, Alyssa Milano, Michael Moore, Rosie Perez, and Whoopi Goldberg are among the celebrities who are planning on attending “The People’s State of the Union,” billed as a “public alternative” to Trump’s first State of the Union address.

USA Today reports that “The event is planned for Monday, the day before Trump’s speech, at The Town Hall, a historic venue in Manhattan founded as a meeting spot for suffragists more than 90 years ago.”

King has been one of Trump’s harshest critics the last several months.

For instance, in March 2017, he put together a little three-part short story mocking Trump’s Twitter tirade wherein he not only accused President Obama of wire-tapping Trump Tower, but he also inadvertently revealed that the FBI had obtained a FISA warrant granting an examination of his campaign.

True to form, King mocked Trump’s Obama conspiracy theories with a few frightening ones of his own in a 3-part Twitter short story.

As The Independent reported at the time: “The tweets were written in the President’s distinctive style, with words capitalized for emphasis, and included his trademark sign-off,’SAD!’”

In May of 2016, the King of Horror joined over 600 other writers who signed an open letter pleading with the American public to stop Trump a couple of months before he clinched the Republican nomination.

The letter stated that Trump “deliberately appeals to the basest and most violent elements in society” and “denigrates women and minorities.” Among the reasons the writers gave for their opposition to Trump were, “the history of dictatorship is the history of manipulation and division, demagoguery and lies” and “because neither wealth nor celebrity qualifies anyone to speak for the United States, to lead its military, to maintain its alliances, or to represent its people.”

In April 2017 King dropped his own bomb on Trump after he bragged about U.S. forces dropping what the media called “the mother of all bombs” on an ISIS target in Afghanistan.

King took to his twitter at the time, posting two tweets mocking Trump’s bluster and calling him “President Forrest Trump,” a reference to the fictional movie character Forrest Gump played by Tom Hanks.

The next day he returned to Twitter, mocking Trump’s cowardice regarding the release of his tax returns:

King has also teamed up with with British novelist, screenwriter, and film producer J.K. Rowling to poke fun at the bigoted-billionaire.

In September 2017, King retweeted one of Rowling’s tweets responding to part one of a two part tweet by Trump about the NFL.

A few days later, King followed up with a tweet of his own: “According to the NY Times, N. Korea asks Repubs for help figuring out Doanld [sp?] Trump. Repubs respond, ‘We were going to ask you.‘”

The list goes on and on, and King’s Twitter activism is expected to continue as Trump’s reign continues – at least for now.

What are you doing to push back against Trump’s first State of the Union speech? Let us know in the comments below.