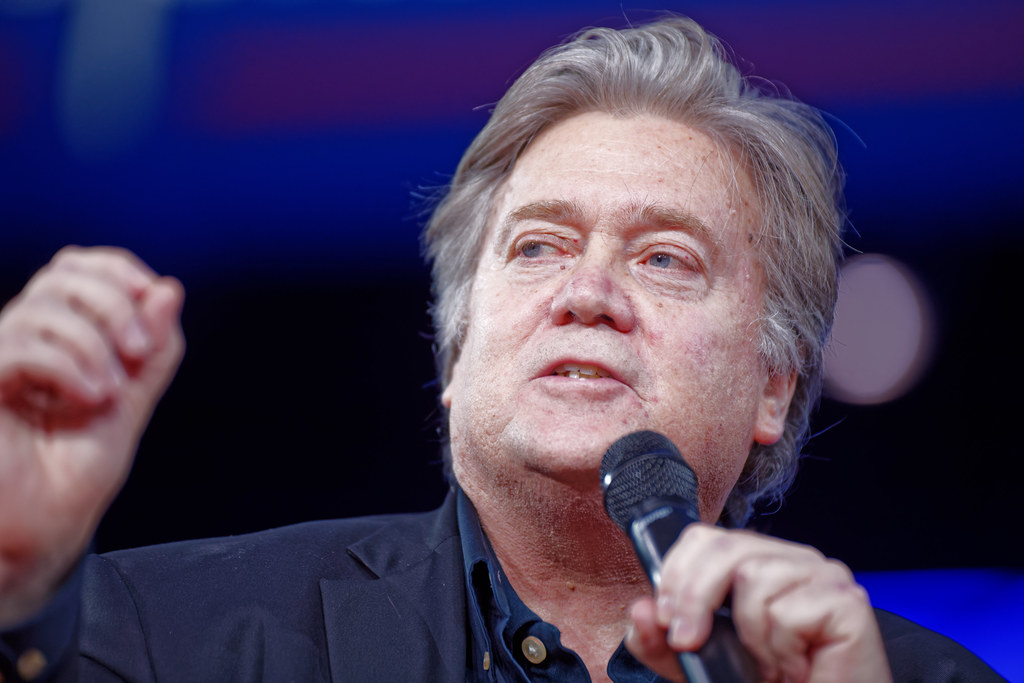 Bannon’s plan for America is far more treacherous than taking down Republicans. His target is American democracy itself – as demonstrated by this terrifying quote.

All hell broke loose this week as Donald Trump moved to crush a rebellion within the GOP led by former White House chief strategist Steve Bannon.

NBC News reported today that: “Bannon is on the run, and his guerrilla war against the Republican establishment is on the verge of being extinguished after his political patron, Donald Trump, accused him Wednesday of having ‘lost his mind’ and of being ‘only in it for himself.'”

In a stunning 266-word statement of rebuke against his former campaign aide and White House strategist, a clearly infuriated Trump echoed and expanded on the criticisms that establishment Republicans have leveled against Bannon since he took over the Trump campaign in August 2016.

The immediate impetus for Trump’s broadside was the Wednesday publication of excerpts of a forthcoming book — Michael Wolff’s “Fire and Fury: Inside the Trump White House” — in which Bannon is quoted as saying that a meeting between Russian emissaries and members of the Trump campaign, including the president’s son Donald Jr. and son-in-law, Jared Kushner, was “treasonous” and “unpatriotic.”

The Guardian reported last year on Bannon’s call for a Republican “revolt” during an October 2017 speech at the California Republican Party Convention:

Bannon’s remarks in Anaheim came during an address thick with attacks on the Washington status quo, echoing his call for an “open revolt” against establishment Republicans before next year’s midterm elections. He called the “permanent political class” one of the great dangers faced by the country.

To that end, “Bannon is promoting a field of primary challengers to take on incumbent Republicans in Congress.”

Bannon’s Aim Is American Democracy Itself – Not Just The GOP

CNN’s Van Jones warned both Democrats and Republicans in January 2017 that Bannon’s aim was American democracy itself, not just the GOP:

“This is no longer “left v right.” The #Resistance is now a pro-democracy movement against a would-be authoritarian regime. Dems & GOP unite!” he tweeted:

This is no longer "left v right." The #Resistance is now a pro-democracy movement against a would-be authoritarian regime. Dems & GOP unite!

The Daily Beast contributor Ronald Radosh said as much last year, reporting in August 2016 that he met Steve Bannon, Trump’s Chief Strategist and Senior Counselor, “at a book party held in his Capitol Hill townhouse on Nov. 12, 2013.”

We were standing next to a picture of his daughter, a West Point graduate, who at the time was a lieutenant in the 101 Airborne Division serving in Iraq. The picture was notable because she was sitting on what was once Saddam Hussein’s gold throne with a machine gun on her lap. “I’m very proud of her,” Bannon said.

Then we had a long talk about his approach to politics. He never called himself a “populist” or an “American nationalist,” as so many think of him today. “I’m a Leninist,” Bannon proudly proclaimed.

Shocked, I asked him what he meant.

“Lenin,” he answered, “wanted to destroy the state, and that’s my goal too. I want to bring everything crashing down, and destroy all of today’s establishment.” Bannon was employing Lenin’s strategy for Tea Party populist goals. He included in that group the Republican and Democratic Parties, as well as the traditional conservative press. [emphasis added]

Bannon’s fondness for the Russian revolutionary is telling in light of the the recent scrutiny over Russia’s pro-Trump interference in the 2016 election. Vladimir Lenin was the leader of Russia’s Bolshevik Party whose 1917 October Revolution threw a provisional government out of power, leading to the creation of the USSR.

Whether speaking to supporters of former Alaska Gov. Sarah Palin or to listeners on his former radio show, Bannon has long employed the revolutionary language of a political insurgent. And like political insurgents through history, including Lenin, Bannon and other like-minded ideologues … view disruption and polarization as means of pressing ahead with their agenda and rallying their core supporters. [emphasis added]

The Daily Beast contributor Matt Lewis reported in September 2017 that:

To understand why this is happening, it’s important to understand that Bannon views himself as a revolutionary, not as a conservative. The French Revolution did not seek to reform monarchists or priests, but to behead them. … In Bannon’s world, chaos isn’t the enemy. It is, in fact, a necessary ingredient.