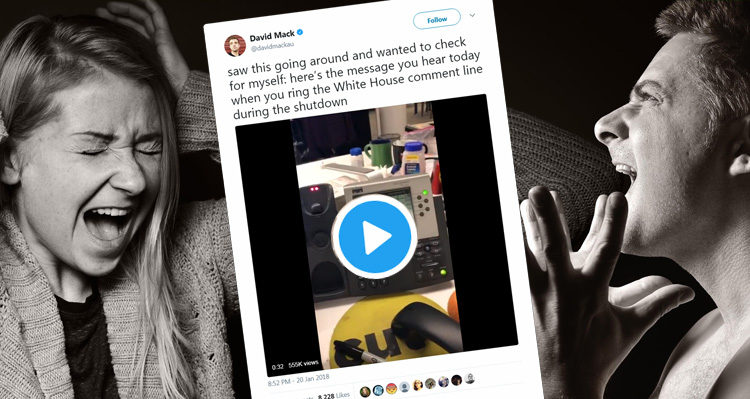 BuzzFeed’s David Mack posted a video recording of the unprecedented attack by the White House on Democrats.

The Trump administration seems to be doing everything in its power to derail any meaningful discussion in Congress regarding the government shutdown.

Fact-checking website Snopes reported that, on Saturday, “The Republican-controlled White House went so far as to change the outgoing message on the White House telephone comment line (202-456-1111) to an unprecedented message blaming Democrats.”

Thank you for calling the White House. Unfortunately, we cannot answer your call today, because Congressional Democrats are holding government funding, including funding for our troops and other national security priorities, hostage to an unrelated immigration debate. Due to this obstruction, the government is shut down. In the meantime, you can leave a comment for the president at www.whitehouse.gov/contact. We look forward to taking your calls as soon as the government reopens.

Snopes called the number to confirm the message and reported that several reporters posted about the message as well, such as BuzzFeed’s David Mack:

saw this going around and wanted to check for myself: here’s the message you hear today when you ring the White House comment line during the shutdown pic.twitter.com/sCquYj0XnX

Reuters reported that: “The new ad is likely to anger Democrats and immigration advocates and could inflame tensions over the issue on Capitol Hill, where Democrats and Republicans were working through the weekend to reach an agreement that would reopen the government.”