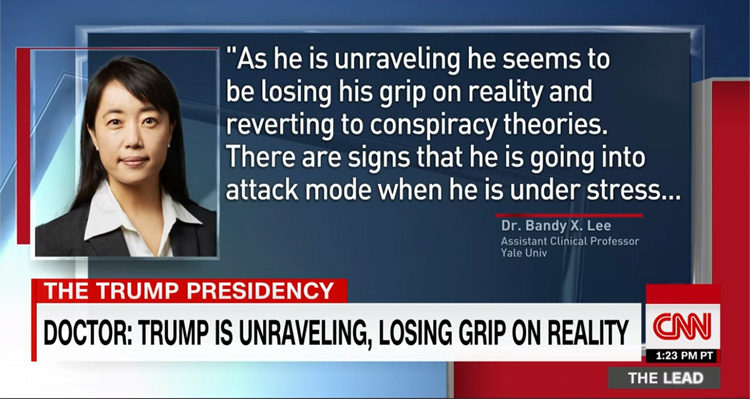 “It would be hard to find a single psychiatrist, no matter of what political affiliation, who could confidently say Trump is not dangerous.” ~ Dr. Bandy X. Lee, MD, MDiv

There has been much concern about Trump’s possible mental state in recent weeks.

As Vox reported this Saturday (06 January 2018): “The longer Donald Trump is in office, the more he shocks and alarms us with his strange and extremely unpresidential behavior.”

From the incoherent, fallacious interview he gave The New York Times on December 28 to Tuesday’s tweet about his “nuclear button” to his Saturday morning assertion that he is a “very stable genius,” the remarks keep getting more menacing, bizarre, and portentous of disaster.

In private meetings with more than a dozen members of Congress held on Dec. 5 and 6, Lee briefed lawmakers — all Democrats except for one Republican senator, whom Lee declined to identify. Her professional warning to Capitol Hill: “He’s going to unravel, and we are seeing the signs.”

CNN conducted a telephone interview with Dr. Lee last Thursday, who told them:

Lawmakers were saying they have been very concerned about this, the President’s dangerousness, the dangers that his mental instability poses on the nation, They know the concern is universal among Democrats, but it really depends on Republicans, they said. Some knew of Republicans that were concerned, maybe equally concerned, but whether they would act on those concerns was their worry.

Lee is scheduled to hold another briefing at the home of Democratic Rep. Rosa DeLauro later this month with lawmakers on the same topic and is also scheduled to speak at Democratic Rep. Jamie Raskin’s town hall in Maryland this month as well. Raskin has introduced a bill called the “Oversight Commission on Presidential Capacity Act,” which would use the 25th Amendment of the Constitution to create a “body” to determine whether the President is unable to execute the powers and duties of his office.

Raskin, who attended Lee’s presentation, told CNN’s Jake Tapper on Thursday that Trump’s behavior is “increasingly delusional” and there should be an independent body to evaluate his fitness.

“Of course we got big public policy crises going on right now,” Raskin said on CNN’s “The Lead with Jake Tapper.” “We’ve got a gun violence crisis, we’ve got the tax bill — which was bought and paid for by the Koch brothers and the Mercers — so we got some serious stuff to deal with and instead we’re caught up every day in what looks like the country debating the mental health of the president, so it’s a very dangerous and unstable situation as a number of Republican senators have themselves observed.”

Dr. Lee also elaborated on her thoughts in an interview conducted by Eliza Barclay of Vox which was published on Saturday.

Barclay asked about the Goldwater Rule and medical consensus:

But is it a medical consensus? There are some prominent psychiatrists and psychologists — for instance, Jeffrey Lieberman, the chair of psychiatry at Columbia University Medical Center and former president of the American Psychiatric Association — who have criticized your book.

This is a disagreement over ethical rules, not medical assessment. It would be hard to find a single psychiatrist, no matter of what political affiliation, who could confidently say Trump is not dangerous. I am sure there are some who feel unsure, or feel that they don’t have enough information or the expertise, and that is fine, since not everyone has devoted her 20-year career to studying, predicting, and preventing violence like I have. But there has not been a single serious mental health expert who disagrees on the medical side.

Dr. Lee, who also edited The Dangerous Case of Donald Trump, a collection of essays from 27 mental health professionals, wrote an opinion piece for The Guardian this weekend titled: “Trump is now dangerous – that makes his mental health a matter of public interest.”

Writing of that book and ethical concerns, Dr. Lee wrote:

While we keep within the letter of the Goldwater rule – which prohibits psychiatrists from diagnosing public figures without a personal examination and without consent – there is still a lot that mental health professionals can tell before the public reaches awareness. These come from observations of a person’s patterns of responses, of media appearances over time, and from reports of those close to him. Indeed, we know far more about Trump in this regard than many, if not most, of our patients. Nevertheless, the personal health of a public figure is her private affair – until, that is, it becomes a threat to public health.

To make a diagnosis one needs all the relevant information – including, I believe, a personal interview. But to assess dangerousness, one only needs enough information to raise alarms. It is about the situation rather than the person. The same person may not be a danger in a different situation, while a diagnosis stays with the person.

It is Trump in the office of the presidency that poses a danger. Why? Past violence is the best predictor of future violence, and he has shown: verbal aggressiveness, boasting about sexual assaults, inciting violence in others, an attraction to violence and powerful weapons and the continual taunting of a hostile nation with nuclear power. Specific traits that are highly associated with violence include: impulsivity, recklessness, paranoia, a loose grip on reality with a poor understanding of consequences, rage reactions, a lack of empathy, belligerence towards others, and a constant need to demonstrate power.

There is another pattern by which he is dangerous. His cognitive function, or his ability to process knowledge and thoughts, has begun to be widely questioned. Many have noted a distinct decline in his outward ability to form complete sentences, to stay with a thought, to use complex words and not to make loose associations. This is dangerous because of the critical importance of decision-making capacity in the office that he holds. Cognitive decline can result from any number of causes – psychiatric, neurological, medical, or medication-induced – and therefore needs to be investigated. Likewise, we do not know whether psychiatric symptoms are due to a mental disorder, medication, or a physical condition, which only a thorough examination can reveal.

Dr. Lee concluded her article, calling for a mental health evaluation of Trump:

It does not take a mental health professional to see that a person of Trump’s impairments, in the office of the presidency, is a danger to us all. What mental health experts can offer is affirmation that these signs are real, that they may be worse than the untrained person suspects, and that there are more productive ways of handling them than deflection or denial.

Screening for risk of harm is a routine part of mental health practice, and there are steps that we follow when someone poses a risk of danger: containment, removal from access to weapons and an urgent evaluation. When danger is involved, it is an emergency, where an established patient-provider relationship is not necessary, nor is consent; our ethical code mandates that we treat the person as our patient.

In medicine, mental impairment is considered as serious as physical impairment: it is just as debilitating, just as objectively observable and established just as reliably through standardised assessments. Mental health experts routinely perform capacity or fitness for duty examinations for courts and other legal bodies, and offer their recommendations. This is what we are calling for, urgently, in doing our part as medical professionals. The rest of the decision is up to the courts or, in this case, up to the body politic.