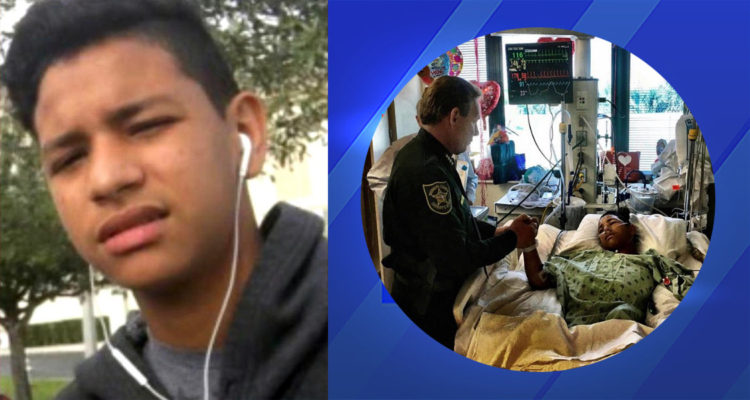 15-year-old Anthony Borges is being hailed as the hero of the Florida shooting.

Newsweek reported that: “A 15-year-old student, who was shot five times as he attempted to shield his classmates from a gunman during the deadly school shooting in Parkland, Florida has been hailed as a hero.”

Anthony Borges barricaded the door to a classroom at Marjory Stoneman Douglas High School with his own body to protect the 20 children inside from the gunman, who allegedly fired shots into Borges’s back and legs as he attempted to save his friends.

Fellow student Carlos Rodriguez told ABC‘s “Good Morning America“ that he and more than a dozen other students owed their lives to Borges’ heroism.

“None of us knew what to do. So, he took the initiative to just save his other classmates,” Rodriguez, Borges’ best friend recounted.

The New York Daily News reported that Borges was rushed to the hospital with bullet wounds to his back and legs. He was the last of the hospitalized survivors to be listed as “critical”, but his condition has now been upgraded to stable.

The Telegraph reported that:

The boy’s father, Royer Borges, said he received a phone call from the teenager who told him: “Dad, somebody shot me in the back and my leg, too.”

Mr Borges called his son a “hero”, adding: “I only ask that people pray for him.”

The Broward Country Sheriff’s Office posted a photo of Sheriff Scott Israel meeting with Borges at the hospital.

Sheriff Israel was honored to visit Anthony Borges, 15, in the hospital today. His family shared that Anthony was shot five times in Wednesday’s school attack. Fortunately, he is recovering — but has a long road ahead with more surgeries needed. Please join us in praying for the swift recovery of Anthony and all the other victims of this horrific criminal act.

Anthony is a victim of the shooting at Marjory Stoneman Douglas High School.  During this unspeakable tragedy, Anthony was able to save about 20 other students as he attempted to close and lock the door to a classroom.  He was shot multiple times (both legs were shot, left upper thigh bone shattered and one bullet went through his back).  He has a long road of recovery ahead of him but he is alive and stable.

Our thoughts and prayers are with Anthony and his family.  Any help is very much appreciated.