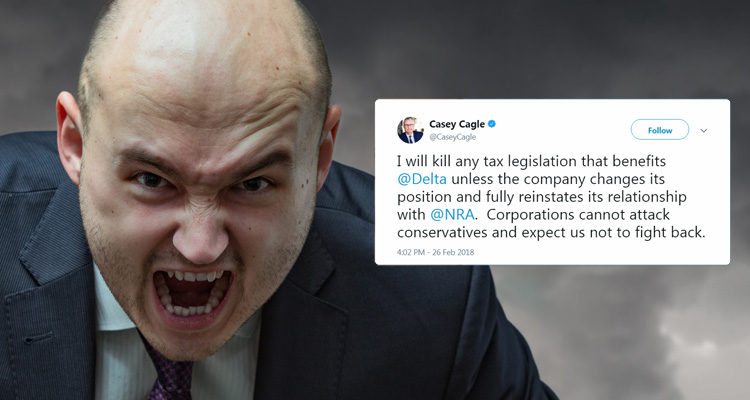 Georgia’s Republican lieutenant governor threatened to prevent Delta Air Lines from getting a lucrative tax cut unless they reactivate their discount program for members of the NRA.

Reuters reported over the weekend that: “Delta Air Lines and United Airlines on Saturday became the latest major corporations to sever marketing ties with the National Rifle Association as the fallout from last week’s massacre at a Florida high school took its toll on the gun advocacy group.”

Republican Lt. Gov. Casey Cagle, president of the state Senate and a leading candidate to succeed Gov. Nathan Deal, took to his Twitter account on Monday, threatening to kill an anticipated tax break that would benefit the airline.

“I will kill any tax legislation that benefits @Delta unless the company changes its position and fully reinstates its relationship with @NRA. Corporations cannot attack conservatives and expect us not to fight back,” he tweeted.

I will kill any tax legislation that benefits @Delta unless the company changes its position and fully reinstates its relationship with @NRA. Corporations cannot attack conservatives and expect us not to fight back.

And, indeed, that’s exactly what ended up happening.

The Atlanta Journal-Constitution reported on Monday that the Georgia Senate scuttled the $50 million jet fuel sales tax exemption that would have benefited Delta Airlines, which is headquartered in Georgia and has its largest hub at Atlanta’s Hartsfield-Jackson International Airport.

Senate Republicans vowed to remove the tax break from a tax bill that has already been voted on and passed.

USA Today reported that: “State Sen. Rick Jaffares, a Republican, said that the break was worth $40 million but that he would lead the charge against it ‘to let Delta know their attack on the NRA and our 2nd Amendment is unacceptable.'”

I stand with the NRA & support our 2nd Amendment rights. Delta Airlines is now seeking $40 MILLION TAX BREAK from the GA Legislature. I'm leading the charge to let Delta know their attack on the NRA and our 2nd Amendment is unacceptable. #StandWithJeffareshttps://t.co/YQ16VcGch2 pic.twitter.com/1x256htX9u

NPR noted that: “In an earlier tweet, Cagle — who has earned an ‘A+’ rating from the NRA every year since he assumed elected office and has been endorsed by the group – criticized corporations who cut ties with the NRA, calling on them instead to ‘donate a portion of [their] profits to mental health treatments and school safety initiatives.'”

Discriminating against law-abiding gun owners will not solve the problem #2A #gapol pic.twitter.com/DqR6PePBd7

Below is a sampling of responses: