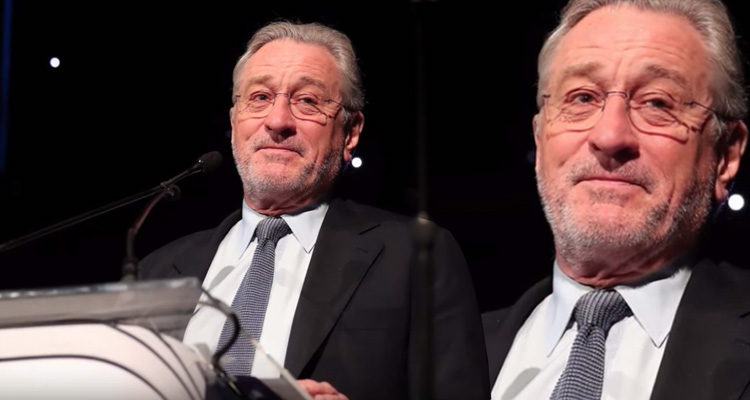 Robert De Niro wasn’t holding anything back when he tore into what he called “the Trump world of dishonesty and greed.”

Legendary film actor and producer Robert De Niro isn’t bashful when it comes to sharing his thoughts regarding Trump; and Tuesday night was no exception, when he gave a speech at a charity fundraising dinner.

The event benefited the Fulfillment Fund, a group that helps the poor enter into higher education; and De Niro began his speech by providing some background on the organization before turning his attention to Trump.

“A college education is important, but education without humanity is ignorance. Look at our president. He made it through the University of Pennsylvania, so he was exposed to a quality education, but he’s still an idiot. And he lacks any sense of humanity or compassion,” De Niro told the audience.

“After his college graduation in 1968 Trump lost his deferment and could have been drafted in a year when roughly 300,000 men entered the army through the Selective Service system with most going to Vietnam. He received a medical deferment for having bone spurs in his heels and was not called up.”

Continuing, De Niro stated: “And it is especially appropriate tonight, Trump treats education as a con — a way to make a profit at the expense of the suckers. Anyone here planning to get their education at Trump University? To be silent in the face of such villainy is to be complicit.”

He concluded his remarks about Trump, telling the audience: “But don’t be discouraged, young people. Get your degree from a legitimate institution; you don’t have to become president — you can get an honest job. Or become president — why not? — and restore integrity and dignity to the job.”

This isn’t the only time so far this year that De Niro has ripped Trump. Back in January, De Niro blasted Trump while introducing best actress winner Meryl Streep at Tuesday’s National Board of Review awards gala.

Back in August 2016, shortly before the election, De Niro compared Trump to the mentally disturbed Travis Bickle, his character from “Taxi Driver.”