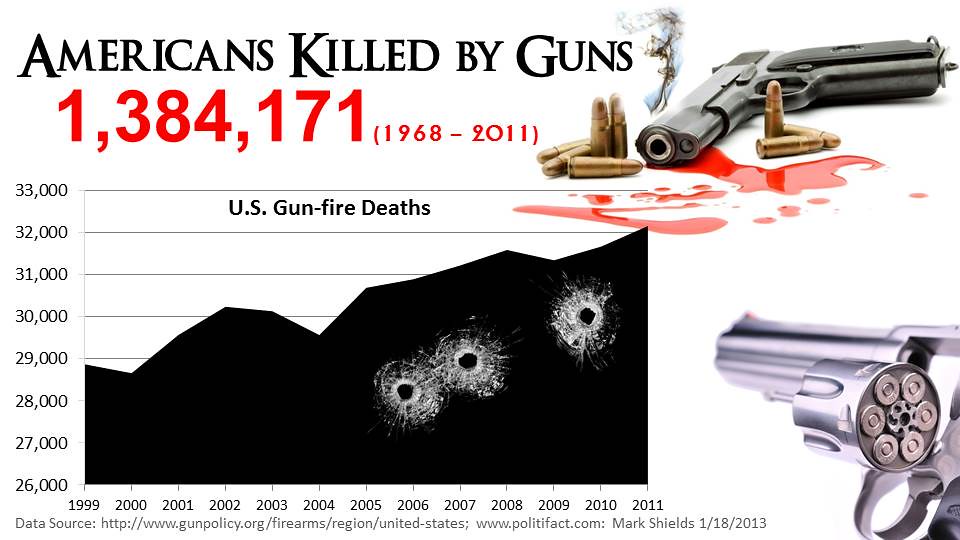 Research reveals some figures the NRA would rather us not know.

The NRA is scrambling to defend their arcane perspective on guns and the Second Amendment in the wake of recent mass shootings and the efforts of the March for Our Lives movement.

As Vox reported earlier this week, March for Our Lives “could win by making more people more passionate about gun control, the movement could help close a big gap in the current debate.”

Hundreds of thousands came in from around the country to march in Washington, DC. They chanted and cheered as speakers — mainly students and teenagers — appeared on-stage to call for gun control measures…. And they vowed to fight for significant change — and vote. As march organizer David Hogg put it, “We’re going to make this the voting issue. We’re going to take this to every election, to every state and every city.” He added, “To those politicians supported by the NRA that allow the continued slaughter of our children and our future, I say get your résumés ready.”

A change in America’s approach to gun violence is long overdue and possibly most disturbing is the fact that the warning signs have been clear all along.

“You know, Judy, the reality is – and it’s a terrible reality – since Robert Kennedy died in the Ambassador Hotel on June 4, 1968, more Americans have died from gunfire than died in … all the wars of this country’s history, from the Revolutionary through the Civil War, World War I, World War II, in those 43 years. … I mean, guns are a problem, and I think they still have to be confronted.”

Pulitzer Prize winning fact-checking website PolitiFact was able to confirm that claim using “a comprehensive study of war-related deaths published by the Congressional Research Service on Feb. 26, 2010… supplemented with data for deaths in Iraq and Afghanistan using the website icasualties.org.”

PolitiFact provided the following summary of deaths for each conflict using “the broadest definition of ‘death’ — that is, all war-related deaths, not just those that occurred in combat.”

Continuing, PolitiFact reported that: “Another 362 deaths resulted from other conflicts since 1980, such as interventions in Lebanon, Grenada, Panama, Somalia and Haiti, but the number is not large enough to make a difference.”

Continuing their analysis, PolitiFact reported that “The number of deaths from gunfire is a bit more complicated to total.”

Two Internet-accessible data sets from the Centers for Disease Control and Prevention allow us to pin down the number of deaths from 1981 to 1998 and from 1999 to 2010. We’ve added FBI figures for 2011, and we offer a number for 1968 to 1980 using a conservative estimate of data we found in a graph in this 1994 paper published by the CDC.

As with war-related deaths, PolitiFact provided a summary of total deaths caused by firearms:

The NRA and pro-gun crazies have been spouting statistics for their cause, in fear, since the Sandy Hook massacre. Liberal/Pro-GunSense groups have given their own figures. Who wins? Nobody. The study is devastating, and proves America has sorely lost, is losing, and will continue to lose, until laws are changed.

This sobering and poignant information needs to become known to every U.S. citizen. And we need to demand action. Thank you, Mark Shields. Thank you, PolitiFact for the research.

Sadly, the gun epidemic continues – with the help of the NRA and politicians willing to accept their blood-money donations.

[A] study based on data from 2012 to 2014 suggests that, on average, 5,790 children in the United States receive medical treatment in an emergency room each year for a gun-related injury. About 21% of those injuries are unintentional, similar to the third-grader’s case.

The Guardian reported the following information October 2017 in the wake of the deadly mass shooting in Las Vegas:

What doesn’t this [data] show? The more than 70,000 people who are injured by guns each year.

Everytown offers the following breakdown of gun violence by the numbers: