Several websites have hilariously pondered the question of Trump’s small hands beginning in 1988.

Mother Jones published an article in February 2016 discussing the background of the debate about Trump’s fingers and what it might mean for his plans to “make America great again.”

For Achilles, it was the heel. For Samson, it was the hair. For Beast, twas’ beauty. Donald Trump may appear impervious to the sharpest Republican barbs, but he has one proven weakness over the course of his four decades in overly public life: stubby fingers.

Trump has presumably had short fingers for as long as he’s had fingers, but it wasn’t until 1988 that anyone called attention to it. That year, Spy magazine began the practice of needling Trump at every opportunity by referring to him in virtually every story as a “short-fingered vulgarian.” (“Queens-born casino profiteer” would also do.) Trump defended his honor in the New York Post, stating that “my fingers are long and beautiful, as, has been well-documented, are various other parts of my body.”

So just what do Trump’s Bart Simpson hands have to do with making America great again? According to Madame La Roux’s 1993 treatise on palm reading, The Practice of Classical Palmistry, quite a lot! 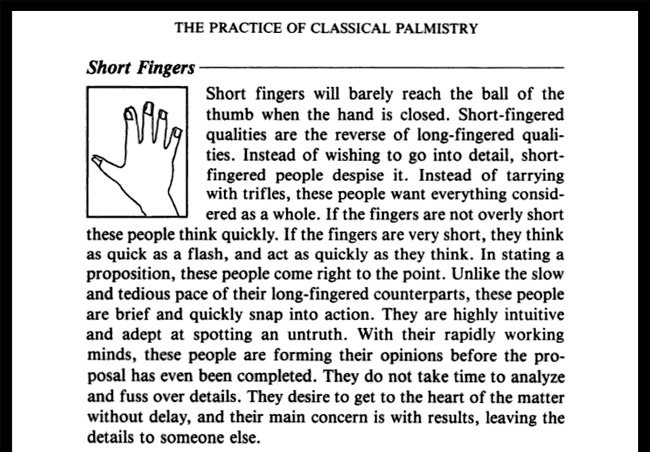 Mother Jones posted a screenshot of excerpts from pages 35-36 of the book along with the following observation:

Writing that they “don’t think Trump’s baby-carrot fingers have any bearing on his presidential temperament,” Mother Jones concluded their article reminding readers of Trump’s belief in what the rest of us consider to be voodoo science – such as his belief that the concept of climate change was created by the Chinese.

The concept of global warming was created by and for the Chinese in order to make U.S. manufacturing non-competitive.

The Washington Post weighed in on the question of Trump’s finger size in August 2016 in an article titled: “Yes, Donald Trump’s hands are actually pretty small.”

Citing an article by The Hollywood Reporter, The Washington Post reported that:

The Hollywood Reporter measured his hand to be 7.25 inches from his wrist to the tip of his middle finger. (You can print out a life-sized outline of Trump’s hand here, and see how you stack up.)

According to data from Ergonomics Center of North Carolina, the average American male’s hand is 7.61 inches long. Trump’s hand sits at the 15th percentile mark. That is, 85 percent of American men have larger hands than Trump. As do a third of women.

at the end of February when Marco Rubio, at a rally for his presidential campaign in Virginia, said of Trump: “He’s like 6-2, which is why I don’t understand why his hands are the size of someone who’s 5-2”. He added, “And you know what they say about men with small hands.” The audience roared.

Three days later, at one of the final Republican presidential debates, Trump shot back: “Nobody has ever hit my hands. I’ve never heard of this.” And of course, he defended the size of his penis as well: “I guarantee you, there’s no problem. I guarantee you.”

The Washington Post had the opportunity to interview Trump a couple of weeks later, reporting that: “Fifty-two minutes into Donald Trump’s discussion of weighty issues with The Washington Post’s editorial board came an interlude about his hands.”

Esquire took a different approach in October 2016 in an article titled: “IS DONALD TRUMP GENETICALLY DEFECTIVE?” and carrying the subtitle: “A medical investigation into the short-fingered vulgarian.”

It’s sweet how concerned Donald Trump and his army of amateur medical investigators have been about Hillary Clinton’s health during this election season, sifting the Internet for clues to find a proper diagnosis for what ails her so she can get help. So it is unfair that nobody is giving Trump’s health the same detailed attention—not even his personal physician. Thankfully, one vigilant doctor has been keeping a close clinical eye on the self-identified superhuman Republican candidate and made a startling discovery: the likely cause of his short, short, short fingers.

One of the conditions that has long been associated with shortened metacarpal bones—those are the bones in your hands that are between your wrist and your fingers—is a disease called Albright’s hereditary osteodystrophy, which was accompanied by abnormal blood levels of calcium and phosphorous. Everybody who is an endocrinologist knows about it. That’s why I was completely taken by the hands when I saw them, because that’s the kind of thing that I look at all the time in patients that have problems with calcium, which is what my special interest was.

Dr. Neer elaborated after being asked: “Is there a longer name for it that might make Trump feel more special? It might help him to know that something about him is longer.”

The condition that was described back in the 1930s is called pseudopseudohypoparathyroidism. The weirdness of the name means that many doctors who might otherwise not be expected to know anything about it have at least heard about it.