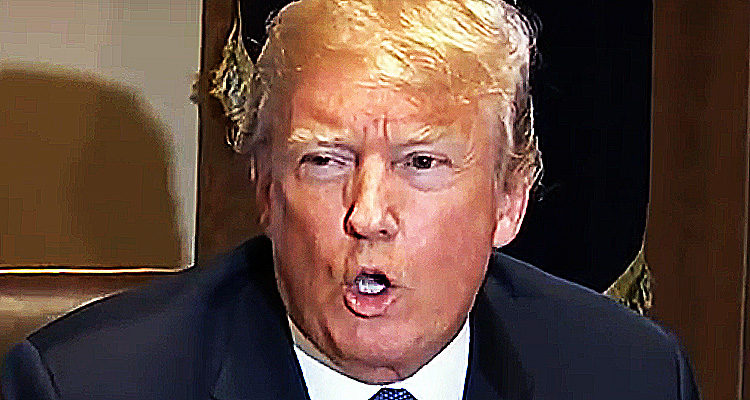 The New York Times reported, “Trump spoke to reporters on Monday at the beginning of a meeting with military leaders and national security officials. He reacted to the news that the F.B.I. raided the office of his personal lawyer, Michael D. Cohen, and discussed his frustrations with his attorney general, Jeff Sessions, and the special counsel’s investigation being led by Robert S. Mueller III.”

Seth Abramson weighed in on the spectacle, accusing Trump of committing “a televised confession of obstruction of justice.”

Continuing, Abramson tweeted: “This was said in the context of Trump saying (again) that AG Jeff Sessions would not have been appointed if Trump had known he wasn’t going to oversee the Russia probe in the way Trump approved of, which, he was saying, was any way that would ‘keep [the investigation] down.’ And yes, Trump *did* just describe the execution of a valid federal search warrant as a break-in (“They just broke in…”) When are Republicans going to jump off this sinking ship?”

2/ This was said in the context of Trump saying (again) that AG Jeff Sessions would not have been appointed if Trump had known he wasn't going to oversee the Russia probe in the way Trump approved of, which, he was saying, was any way that would "keep [the investigation] down."

3/ And yes, Trump *did* just describe the execution of a valid federal search warrant as a break-in ("They just broke in…")

When are Republicans going to jump off this sinking ship?

Below is a video and transcript of the relevant portion of the press conference, followed by an interesting exchange between Trump and an unnamed reporter regarding whether or not Trump is considering firing special prosecutor Robert Mueller.

So, I just heard that they broke in to the office of one of my personal attorneys, a good man, and it’s a disgraceful situation. It’s a total witch hunt. I’ve been saying it for a long time. I’ve wanted to keep it down. We’ve given, I believe, over a million pages worth of documents to the special counsel. They continue to just go forward and here we are talking about Syria, we’re talking about a lot of serious things with the greatest fighting force ever, and I have this witch hunt constantly going on for over 12 months now, and actually much more than that. You could say it was right after I won the nomination it started.

And it’s a disgrace, it’s frankly a real disgrace. It’s an attack on our country in a true sense. It’s an attack on what we all stand for. So when I saw this and when I heard it — I heard it like you did — I said that is really now in a whole new level of unfairness. So this has been going on, I saw one of the reporters who is not necessarily a fan of mine, not necessarily very good to me, he said in effect that this is ridiculous, this is now getting ridiculous. They found no collusion whatsoever with Russia, the reason they found it is there was no collusion at all. No collusion.

They only keep looking at us. So they find no collusion, and then they go from there and they say, “Well, let’s keep going,” and they raid an office of a personal attorney early in the morning and I think it’s a disgrace.

So we’ll be talking about it more, but this is the most conflicted group of people I’ve ever seen. The attorney general made a terrible mistake when he did this, and when he recused himself, or he should have certainly let us know if he was going to recuse himself and we would have used a — put a different attorney general in. So he made what I consider to be a very terrible mistake for the country, but you’ll figure that out.

All I can say is after looking for a long period of time, not even before the special counsel because it really started just about from the time I won the nomination, and you look at what took place and what happened and it’s a disgrace. It’s a disgrace. I’ve been president now for what seems like a lengthy period of time. We’ve done a fantastic job. We’ve beaten ISIS. We have just about 100 percent of the caliphate or the land. Our economy is incredible.

The stock market dropped a lot today as soon as they heard the noise of, you know, this nonsense that’s going on. It dropped a lot. It was up — way up — and then it dropped quite a bit at the end, a lot. But that we have to go through that, we’ve had that hanging over us now from the very, very beginning and yet the other side, they don’t even bother looking. And the other side is where there are crimes, and those crimes are obvious: Lies under oath, all over the place, emails that are knocked out, that are acid-washed and deleted, nobody’s ever seen — 33,000 emails are deleted after getting a subpoena for Congress, and nobody bothers looking at that.

And many, many other things, so I just think it’s a disgrace that a thing like this can happen.

And here is the exchange with the reporter: