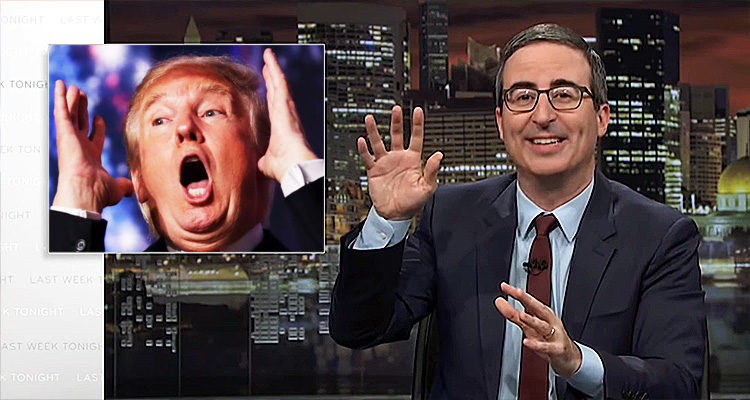 Ouch, that has to sting! John Oliver has been on fire the last couple of weeks taking on the insanity of Trump and lawyers Rudy Giuliani and Michael Cohen.

Bear with us for a moment, as some background information is necessary to fully understanding John Oliver’s remarks.

Two weeks ago, John Oliver took to the airwaves to discuss Rudy Giuliani’s turbulent record as a lawyer, politician, and overall nut job.

Giuliani may be the latest addition to Trump’s circus-like legal team, but he is not new to controversy.

Oliver covered an array of subjects, demonstrating that nothing actually “happened” to Giuliani as many have been saying. Rather, he has been a bit “out there” all along.

Oliver discusses the fact that Giuliani’s first wife was his second cousin. And yes, that claim appears to be true.

PolitiFact rated the claim as true back in 2007 after the matter came up during Giuliani’s failed presidential campaign. “In 1968, Giuliani wed his second cousin, Regina Peruggi, who was the daughter of his father’s first cousin. (Think of your son/daughter marrying your cousin’s daughter/son.)” PolitiFact reported.

“If they do do Ivanka, which I doubt they will, the whole country will turn on him,” Giuliani told Hannity. “They’re going after his daughter?”

“Jared is a fine man, you know that,” Giuliani answered, “But men are, you know, disposable. But a fine woman like Ivanka? Come on.”

And that is the context for John Oliver’s right jab – to both Trump and Giuliani.

When you look at all of this in total you realize that Giuliani’s role as Trump’s lawyer isn’t an aberration. Everything in his life has led to this point. And while he may be providing terrible legal representation for Trump, he’s actually the most honest representation in general because – think about it, they’re basically two versions of the same person. They’re both New Yorkers coasting on their reputations; they’ve both had three marriages; neither of them can shut up when in front of a camera; and perhaps most importantly, they both want to f*ck Ivanka which is weird for Trump because Ivanka is in his family, and it’s weird for Giuliani because she isn’t.

Cohen is now embroiled in a scandal over millions of dollars in payments his shell company received in consulting fees, including $500,000 from a firm linked to a Russian oligarch. AT&T also paid Cohen up to $600,000, a move the company later called a “big mistake.”

Under the company’s yearlong contract, Mr. Cohen provided advice on how AT&T should approach the merger and various regulatory issues, according to a company note to employees. AT&T said Mr. Cohen was one of several consultants it retained at the start of Mr. Trump’s term to help it better understand the president’s thinking.

“Companies often hire consultants for these purposes, especially at the beginning of a new presidential administration, and we have done so in previous administrations, as well,” the company said on Wednesday in the communication to employees. [emphasis added]

Continuing, Oliver landed his second blow in as many weeks:

If you want to understand this president’s thinking, simply have a donkey kick you in the head five times, and then watch Fox News for 72 hours straight. That’ll give you a pretty good idea about what’s going on in his mind.