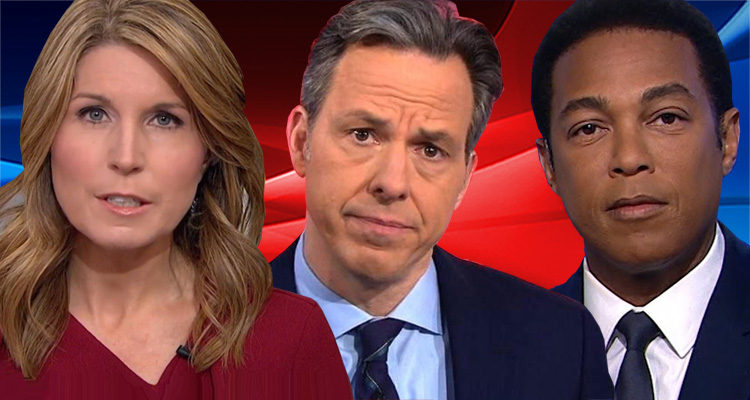 Fed-up, news show anchors are increasingly calling Trump out for his near-endless stream of lies, raising the bar for White House coverage.

Earlier this week, Nicolle Wallace, host of MSNBC‘s “Deadline: White House,” prefaced a video clip by issuing a disclaimer to viewers that Trump’s comments contained lies and smears before she showed it, stating:

We will show you his outlandish claims made on the South Lawn of the White House. But instead of waiting until after you hear those remarks from the president to fact check them, we want to warn you in advance that his meandering comments include lies about the nature of the surveillance of his campaign as well as smears on the former FBI director Jim Comey, also a key witness in the Mueller investigation.

Attacking Comey, we understand, is the Trump legal team’s entire strategy for defending the president in the obstruction of justice investigation, which hinges, at least in part, on Comey’s firing. We also want to tell you his new bumper sticker spygate is also based on a lie. There is no evidence that anyone was spying on the Trump campaign. A counterintelligence investigation was underway.

And for the president, who still doesn’t seem to know what that means, let’s try this. The good guys, American law enforcement agencies, were closely watching the bad guys, American adversaries like the Russians. The reason Trump’s campaign is in the mix is because they ended up in close enough cahoots with Russians to raise suspicions. With those facts in mind, here’s the president’s performance today.

"[The President's] meandering comments include lies about the nature of the surveillance of his campaign as well as smears on the former FBI director … his new bumper sticker "Spygate" is also based on a LIE" – @NicolleDWallace pic.twitter.com/P3J1BqNCMk

CNN‘s Jake Tapper spoke out about Trump’s lies as well, during Wednesday’s airing of “The Lead.”

Talking about Trump’s so-called “Spygate” scandal, Tapper stated that this isn’t the first time that Trump has put forth a conspiracy theory without any evidence.

“While we await the investigation by the Justice Department’s inspector general into this matter, it is worth remembering that, while we are sticking to facts, the President has no such constraints. He simply makes stuff up,” Tapper said, adding: “He frequently lies and has a long and well-documented career engaging in conspiracy theories about all manner of subjects, with no concrete evidence provided.”

Tapper went on to name some of Trump’s most notable conspiracy theories, including that former President Barack Obama wasn’t born in the United States, Sen. Ted Cruz’s father might have been involved in the assassination of JFK, MSNBC host Joe Scarborough was somehow involved in the tragic death of one of his staff members and that Obama had his wires tapped in Trump Tower.

“The FBI is certainly not above criticism and, without question, it needs healthy and robust oversight,” Tapper continued. “But that does not seem to be what the President is pushing for. What he seems focused on is propelling a counter-narrative to try to undermine the special counsel investigation.”

Tapper went on to state that he “will continue digging for the truth despite the bombardment of falsehoods,” while Trump continues to push his counter-narrative.

The longtime CNN anchor Don Lemon spoke out about Trump’s lies during a keynote address on Friday May the 4th at Variety‘s Ent and Tech summit in New York.

Variety reported at the time that:

Lemon, anchor of the nightly 10 p.m.-midnight newscast “CNN Tonight,” spoke about the challenge of calling out what he described as lies told by the President and racist behavior. He also touched on the extraordinarily active news cycle, the importance of aggressive journalism, and the competitive landscape for CNN vs. Fox News and MSNBC.

“We have to be relentless now. We have to be even more careful to make sure we are getting to the bottom of what’s going on,” Lemon said. “The biggest challenge (of covering) this administration is their relationship with the truth.”

.@CNN's @donlemon on Trump: "The biggest challenge with this administration is their relationship with the truth" | #VarietyEntTech https://t.co/p7sI8g8IRa pic.twitter.com/lT2tNYaMQT

Lemon cited the chronicle of some 3,000 falsehoods that the President has uttered since he was inaugurated in January 2017. It was not easy for Lemon to state for the first time that Trump was lying to the public and that he was also demonstrating racist tendencies. But he finally concluded that it was part of his mission as a journalist to bring objective truth to CNN viewers.

“It was a tough call the first time I ever had to call the president a liar,” Lemon said. He noted that all Oval Office leaders shade the truth or assert falsehoods that they believe to be true. “But to go out and lie to people knowingly is something different,” Lemon said. “We saw what happened with Nixon when the President does that. … I finally had to get to the point where we said ‘The President lied about this.’”