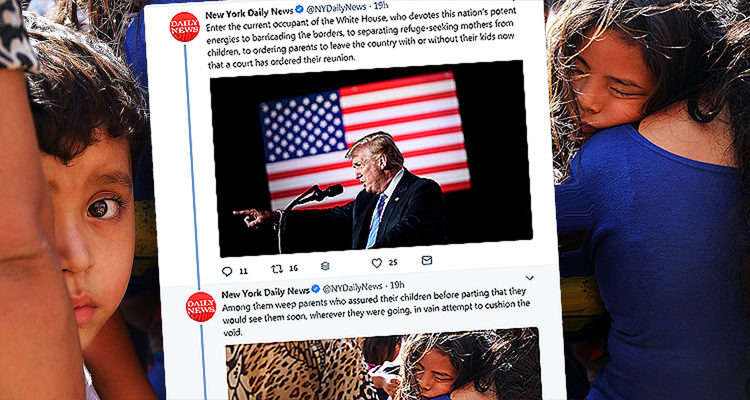 One of Trump’s hometown newspapers blasted him for his arbitrary cruelty, comparing him to King George III.

The New York Daily News has been highly critical of Trump, publishing several covers mocking him and his regressive and cruel policies.

The Fourth of July was no exception, as Trump’s hometown newspaper’s cover image depicted Trump as a clown wearing a shattered crown.

“The clown who plays king can’t overthrow the bedrock values this nation was founded on 242 years ago today,” the headline read.

The President who plays king won’t conquer the bedrock values this nation was founded on. pic.twitter.com/xKVh7X5RZx

The Daily News posted a preview of the cover on the 3rd of July as part of a Twitter thread heavily quoting the Declaration of Independence, comparing the nation’s current struggle with Trump to that of the Founding Fathers’ with King George III, the King of Great Britain, at the time of the signing of that historic document and the subject of the grievances of the original thirteen colonies.

The thread began with “On, #July4th2018, the occasion of the 242nd birthday of the United States of America, again recall the words of our foundational creed: ‘We hold these truths to be self-evident, that all men are created equal, that they are endowed by their Creator with certain unalienable Rights, that among these are Life, Liberty and the pursuit of Happiness.'”

These are words that continue to inspire millions across the globe — even as they were frustratingly hypocritical at the moment of their creation by property-holding men, even as African slaves were kept in bondage, even as 90 years later hundreds of thousands Americans had to fall on the field of battle to get the nation to begin to fully embrace the Declaration’s principles.

Turning their attention to Trump, the Daily News wrote:

Enter the current occupant of the White House, who devotes this nation’s potent energies to barricading the borders, to separating refuge-seeking mothers from children, to ordering parents to leave the country with or without their kids now that a court has ordered their reunion. Among them weep parents who assured their children before parting that they would see them soon, wherever they were going, in vain attempt to cushion the void.

Among them weep parents who assured their children before parting that they would see them soon, wherever they were going, in vain attempt to cushion the void. pic.twitter.com/Jfbw3UJHSw

After detailing more of the horrid results of Trump’s regressive immigration policy, the Daily News returned its attention to the Declaration of Independence, writing:

The Declaration of Independence spoke to such arbitrary cruelty, against an arrogant monarch who “has endeavoured to prevent the population of these States; for that purpose obstructing the Laws for Naturalization of Foreigners; refusing to pass others to encourage their migrations hither…”

The thread then refers to an article for their concluding remark: “The President who plays king won’t conquer the bedrock values this nation was founded on.”