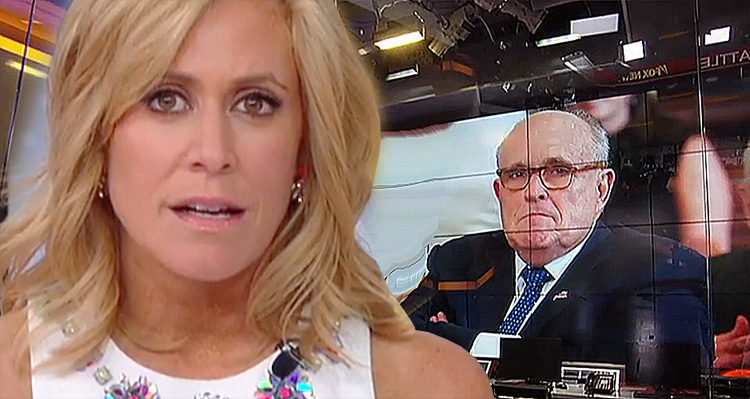 The moment a Fox New host realizes Rudy Giuliani is lying to her in the middle of a live broadcast.

Abramson linked to a Mediaite article covering the segment, and we have included the original Fox News clip. (The portion discussed by Mediaite and Abramson starts at about the 6-minute mark in the video).

As Mediaite explained: Giuliani called in to the program “to clarify his remarks earlier in the day about the Don Jr. Trump Tower meeting and some kind of second meeting that may or may not have happened, which only invited more questions from the Fox hosts.”

Host Harris Faulkner began the exchange asking Giuliani why he had volunteered that Trump had not attended the second meeting: “What we heard you say today was the president was not at that meeting,” Faulkner said. “That actually takes on a question that has not been asked or even suggested. So why did you say that?”

Giuliani attempted to walk back his claim that there was a second Trump Tower meeting, telling Faulkner: “I am telling you the meeting didn’t take place, never happened, he had to handle it himself.”

Co-host Melissa Francis jumped in at that point, stating: “I don’t think any of that really addresses the question of why you would say he wasn’t at the meeting?… Why are you saying that the president wasn’t at the meeting? I understand those two meetings that you just set out there, but that doesn’t explain why you’re saying he wasn’t there. Who asked if he was there? No when asked if he was there.”

That is where Seth Abramson’s stunning analysis comes into play.

Abramson began, tweeting: “Even FNC hosts now realize Trump was on speakerphone (as I said). They keep asking Giuliani why he even raised the question of whether Trump was physically “at” the June 2016 meeting, as no one alleged it. And you can see in their eyes—literally—they know.”

Next, he tweeted a screenshot of Francis, tweeting: “The face of a news anchor who knows she’s being lied to in real time.”

2/ The face of a news anchor who knows she's being lied to in real time: pic.twitter.com/Bq2Ud0UjLZ

Seriously, you have to watch this video: her facial expressions and eye movements are like War & Peace and can’t be captured in stills. Focus on the second half of the interview, after Rudy lassoed himself into knots with obvious lies about the now two conspiratorial meetings. What happens at 5:20 in that video is a Fox News host realizing, visibly, “OMG… they did it. They did all of it. Jesus, where are we now? What happens now? OMG.”

Abramson concluded his thread with the following damning statement regarding the relevance of Giuliani’s Monday remarks:

You can watch the clip, below. The beginning of the segment is relevant, but you can skip to the portion noted above by skipping the 6 minutes.