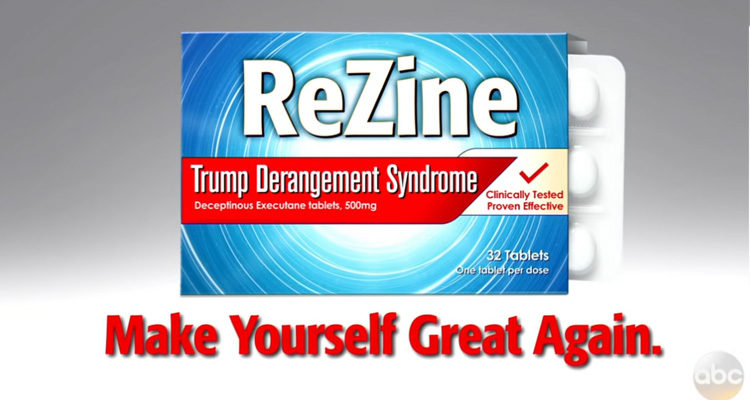 Is ‘Trump Derangement Syndrome’ a real thing? Fear not – Jimmy Kimmel has a cure, and Trump is going to hate it.

Jimmy Kimmel brought up the subject during Thursday night’s show.

“With all of this Moscow madness happening, according to a new Reuters poll 71% of Republican voters have a favorable view of how Trump has been dealing with Russia,” Kimmel began, adding: “Which is nuts.”

Continuing he added: “I was thinking about this today and I think there’s a simple explanation for it. They may not like what he’s doing and they may not like him, but they love how pissed off it makes Democrats. And so they want it to keep happening.”

Some people HATE the fact that I got along well with President Putin of Russia. They would rather go to war than see this. It’s called Trump Derangement Syndrome!

Continuing, Kimmel explained that he’s never heard of Trump Derangement Syndrome, “but if it is a syndrome named after Donald Trump, I assume it’s sexually transmitted.”

Stating that the syndrome must be taken seriously, Kimmel added that “fortunately, help is on the way,” before going to an amazing video clip spoofing the affliction.

And best of all is the solution: “ReZine.”

The best part of the clip is the fact that it rightly promotes the idea of Trump as the one who is deranged – not Democrats and other loyal Americans attempting to hold him accountable for his sometimes treasonous, almost all the time un-American behavior.

“Do you feel the world is out to get you?” the clip begins as the camera zooms in on an image of Trump.

“Do you falsely claim to have said things you didn’t mean to say?” the clip continues zooming in on an image of Trump and Putin followed by a short clip of Trump claiming “I said the word ‘would’ instead of ‘wouldn’t'” from Tuesday’s press conference where he unsuccessfully tried to walk back his Monday remarks taking Putin’s side over that of American intelligence services.

“Do you sometimes make strange sounds for no reason?” the clip continued, followed by a clip of Trump mumbling “bing bing bong bong” at a rally.

“If so you might be suffering from Trump Derangement Syndrome,” the narrator continued – adding: “Ask your doctor about ReZine.”

“ReZine – and get back to the life you used to love. Change your world and THE World. ReZine. Fewer than one-percent of ReZine users experience an obsession with crowd size, tiny handness, male pattern baldness, and explosive diarhea. Make Yourself Great Again, ReZine.”