Bombshell Article: ‘What If Trump Has Been A Russian Asset Since 1987?’ 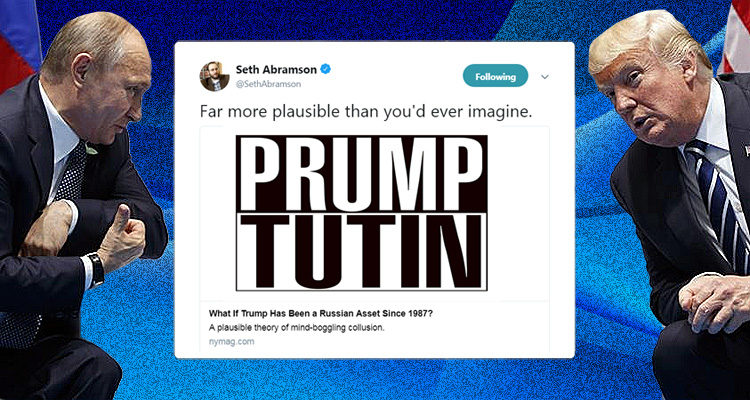 New York Magazine dropped a major bombshell over the weekend with the publication of an article making the case that Trump has been acting as a Russian asset since 1987.

Coming in at nearly 8,000 words, New York Magazine makes a good case for such speculation. Seth Abramson’s posted a tweet with a link to the article, stating: “Far more plausible than you’d ever imagine,” which in my mind lends great credibility to the article. For those unfamiliar with his work, Abramson has been publishing extensive Twitter threads and mega-threads regarding the ongoing investigation into alleged ties between the Trump campaign and Russia. And, while he has his critics, Abramson – a former public defender and criminal investigator at both the state and federal level – has an impressive bio.

The New York Magazine article is far too long to cover here, but we will cover a few highlights and would strongly encourage you to go and read their entire article – linked here, again. It is well worth the read.

The article begins by discussing the fact that most coverage of the possible ties between Trump and Russia have pretty much taking things at face value based on the best available information so far – that sure, the whole story has yet to unfold – but there aren’t any big surprises lurking around the corner.

New York Magazine goes on to provide a short synopsis of what we know so far to include the following:

The first intimations that Trump might harbor a dark secret originated among America’s European allies, which, being situated closer to Russia, have had more experience fending off its nefarious encroachments. In 2015, Western European intelligence agencies began picking up evidence of communications between the Russian government and people in Donald Trump’s orbit. In April 2016, one of the Baltic states shared with then–CIA director John Brennan an audio recording of Russians discussing funneling money to the Trump campaign. In the summer of 2016, Robert Hannigan, head of the U.K. intelligence agency GCHQ, flew to Washington to brief Brennan on intercepted communications between the Trump campaign and Russia.

After noting that Brennan’s concerns are only an unproven theory so far, New York Magazine goes on to state that:

While the fact that the former CIA director has espoused this theory hardly proves it, perhaps we should give more credence to the possibility that Brennan is making these extraordinary charges of treason and blackmail at the highest levels of government because he knows something we don’t.

What follows is a lengthy and detailed analysis by New York Magazine which convincingly pinpoints the beginning of Trump’s collusion with Russia to have begun in 1987.

Below is the start of the NY Mag analysis, and again – the entire article is well worth the read.

Continuing, New York Magazine concedes that “The safest assumption is that it’s entirely coincidental that Trump launched a national campaign, with himself as spokesman, built around themes that dovetailed closely with Soviet foreign-policy goals shortly after his Moscow stay.” However, the possibility that Trump became a Russian asset after that meeting: “can’t be dismissed completely.”

Throughout his career, Trump has always felt comfortable operating at or beyond the ethical boundaries that constrain typical businesses. In the 1980s, he worked with La Cosa Nostra, which controlled the New York cement trade, and later employed Michael Cohen and Felix Sater, both of whom have links to the Russian Mafia. Trump habitually refused to pay his counterparties, and if the people he burned (or any journalists) got in his way, he bullied them with threats. Trump also reportedly circulated at parties for wealthy men featuring cocaine and underage girls.