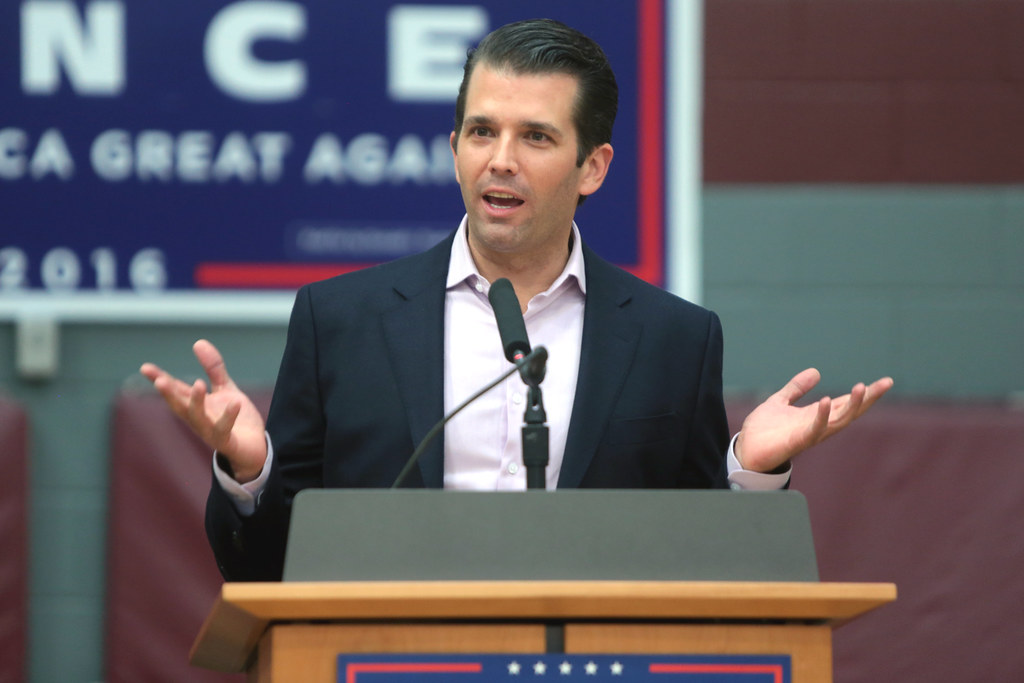 Donald Trump’s eldest son, Donald Jr., posted a fake letter on his Instagram account on Sunday mocking the allegations against his father’s nominee to replace Supreme Court Justice Anthony Kennedy, who retired the last day of July of this year.

Don Jr. posted the image to his 1.3 million followers on Instagram receiving nearly 50k “likes” so far and numerous comments, most of them negative.

The image shows a scrap of paper torn from a spiral notebook with childish handwriting which reads: “Hi Cindy, will you be my girlfriend,” followed by two boxes to be checked marked “yes” and “no.” The noted ended with “Love Bret,” a misspelled reference to Kavanaugh.

“Oh boy… the Dems and their usual nonsense games really have him [Kavanaugh] on the ropes now,” Don Jr. wrote in the image’s caption.

Continuing, he misspelled Democratic Senator Dianne Feinstein’s name. “Finestein [sic] had the letter in July and saved it for the eve of his vote … honorable as always. I believe this is a copy for full transparency.”

As Time reported: “The image references Christine Blasey Ford’s allegation that Kavanaugh had assaulted her when they were both teenagers.”

Kavanaugh has been credibly accused of holding down a girl and trying to rape her in the early 1980s. The girl was 15 at the time and her name was revealed yesterday in The Washington Post as Dr. Christine Blasey Ford, now a professor in California. Just this morning her lawyer told CNN that she’d be willing to testify in front of the U.S. Senate.

In addition to detailing Ford’s version of events, The Washington Post reported that she discussed the incident during counseling in 2012 and retained legal counsel, subsequently passing a polygraph test.

She [Ford] engaged Debra Katz, a Washington lawyer known for her work on sexual harassment cases. On the advice of Katz, who said she believed Ford would be attacked as a liar if she came forward, Ford took a polygraph test administered by a former FBI agent in early August. The results, which Katz provided to The Post, concluded that Ford was being truthful when she said a statement summarizing her allegations was accurate.

As one might expect, Instagram users were quick to respond negatively to the post with several of them pointing out the polygraph test. Other’s took a shot at Don Jr, with several people calling his intelligence into question [“God, you’re stupid”] while others pointed out that this was one of the most despicable things he has done so far. [“This is the single most disgusting thing you’ve ever done.”]

Donald Trump Jr. appeared to make light of new details of allegations of sexual assault against his father’s pick to be the next Supreme Court Justice.

Republicans have come up with a lot of excuses for Supreme Court nominee Brett Kavanaugh’s alleged attempted rape of a 15-year-old girl when he was 17. Some say it never actually happened. Others say he shouldn’t be held accountable for something he did as a teenager. But still others seem to think that it’s all just a big joke. The latter seems to describe Donald Trump Jr., son of the current President of the United States.

Huffington Post similarly reported that Trump was making light of the allegation against Kavanaugh and reported on a further incident on Don Jr.’s post:

Trump Jr. took a further swipe at the sexual assault allegation in a response to a person who commented on his Instagram post, writing: “you joke about it, but it’s important to find the truth regardless of the outcome.”

Replied Trump: “An anonymous letter from an anonymous source that a senator sat on for over 2 months that’s talks about a very public figure who has been scrutinized for decades that the FBI refused to even look at conveniently appears right as he’s finishing confirmation?

“Yea that’s credible… you can’t really buy that crap can you?”