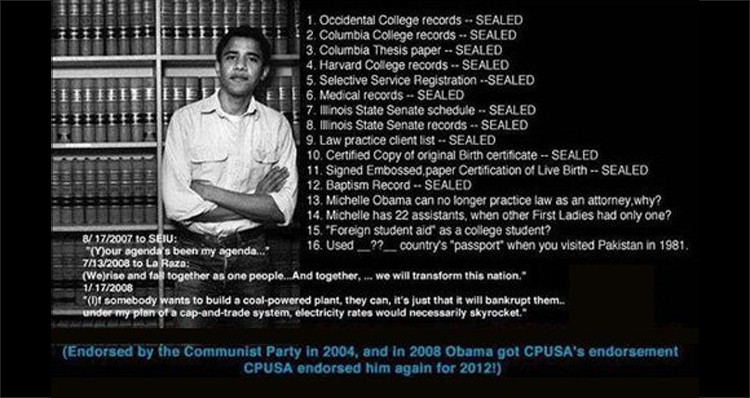 No United States President in history has had as many false and malicious rumors spread about him.  As part of an ongoing public service commitment by this website, we present our series of articles debunking right-wing lies.

Reality: Obama did not actually write the kind of ‘thesis’ that some universities require for graduation, and accordingly there are none on file.  Obama did write a ‘thesis’ about nuclear disarmament for an honors course his senior year, but reporter have already been told that Obama did not keep a copy and  as reported by Snopes back in 2008, Columbia had not retained a copy either.  NBC News contacted Professor Michael Baron, his former professor back in 2008 but he advised he thought it had been tossed out during a move he made back in 2000.

Reality:  Pursuant to the Family Educational Rights and Privacy Act of 1974, it would be illegal under federal law for Occidental, Columbia or Harvard to release the records of any student to reporters or member of the general public without specific written permission from said student.  Obama has not released those records, but neither has any other presidential candidate in history.

Reality: Obama released summary medical information during the 2008 campaign, and since taking office has followed the same practice of other presidents releasing the results of his first medical exam on February 28, 2010 and his second exam October 31, 2011.

Reality: Obama’s voting record as an Illinois State Senator is a matter of public record and during the 2008 campaign reporters extensively reviewed them.  The website for the Illinois General Assembly has transcripts of all Senate debates in which Obama took part posted as well.

Reality: Obama routinely disclosed a full list clients for the firm of Davis, Miner, Barnhill and Gallard where he worked while serving in the state senate although he did not release the list of specific clients he worked for personally.  However, while campaigning in 2008 he did confirm several specific clients when asked to include the liberal organization Acorn, who he represented in 1995.