" /> Is Pope Francis a Relic of 'Medieval Times and the Inquisition'?

Is Pope Francis a Relic of ‘Medieval Times and the Inquisition’? 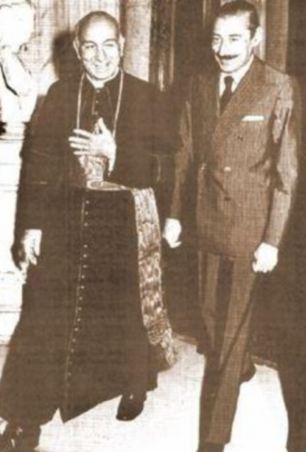 Argentine President Cristina Fernández de Kirchner recently referred to Bergoglio as a relic of “medieval times and the Inquisition.”  At the time, El Presidente was referring to the new Pope’s position on same sex marriage while serving as Archbishop of Buenos Aires back in 2010.  But was that all she meant?

To understand, we need to go back to the time of the Dirty War in Argentina.

After the death of President Juan Peron in 1974 Isabel Peron, his wife and vice president assumed power as president of Argentina. However, she proved to be weak politically and on 24 March 1976 she was overthrown by a military coup d’état which resulted in a seven year campaign of state sponsored terrorism and violence against suspected dissidents and subversive until 1983. During this period many people, both opponents of the government as well as innocent people were taken to secret military detention centers where they were tortured, killed or simply disappeared. Known as “los desaparecidos or “the disappeared”, casualty figures from this period range from 9,000 to over 30,000 people. Victims of that bloody period of Argentine history included left-wing activists, intellectuals, students, journalists, trade unionists, Marxists and Peronist Guerrillas.

Ironically, it was the British and not the Argentines that ended the what was to become known as The Dirty War.  As a last hope effort to cling to power, the Argentine generals launched a military campaign to regain the Falkland Islands (Las Islas Malvinas) which had been a source of contention between the U.K. and Argentina since the early 1800s. Their unexpected loss there, along with the capture of nearly 10,000 Argentine POWs was the final blow for the military regime and in 1982 basic civil liberties were restored and the Dirty War ended when Dr. Raul Alfonsin’s civilian government assumed control of the country on 10 December 1983.

Back to the Future

As expected, there was much celebration in Argentina over Bergoglio taking over as Pope.  However, there has been equal cause for concern – rooted in his alleged connection to Argentina’s Dirty War.

To illustrate, below is a meme that has gone viral in Argentina on Facebook since the Vatican’s announcement yesterday: 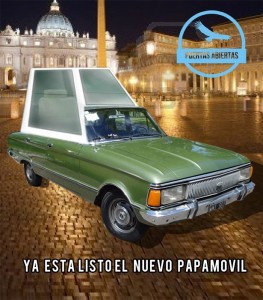 To understand the symbolism for non-Argentines: the green painted Falcon car was one of the symbols of the dictadura and the car used by the police (Policia Federal Argentina) and military to carry out kidnappings. And this picture is in allusion to the links between Bergoglio and the “dirty war” in Argentina. Bergoglio along with the whole Argentine Catholic Church have faced criticism for their complicity during the post-1976 military dictatorship – the Argentine Dirty Wars. 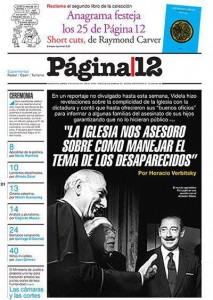 A rough translation/summary reads: Videla, the ex-dictator, reveals how the Church helped the dictatorship. (Pagina 12, Argentina)

In 2011, Hugh O’Shaughnessy, a prize-winning journalist who has written on Latin America for over 40 years, wrote of Bergoglio “The extent of the church’s complicity in the dark deeds was excellently set out by Horacio Verbitsky, one of Argentina’s most notable journalists, in his book El Silencio (Silence). He recounts how the Argentine navy with the connivance of Cardinal Jorge Bergoglio, now the Jesuit archbishop of Buenos Aires, hid from a visiting delegation of the Inter-American Human Rights Commission the dictatorship’s political prisoners. Bergoglio was hiding them in nothing less than his holiday home in an island called El Silencio in the River Plate. The most shaming thing for the church is that in such circumstances Bergoglio’s name was allowed to go forward in the ballot to chose the successor of John Paul II. What scandal would not have ensued if the first pope ever to be elected from the continent of America had been revealed as an accessory to murder and false imprisonment”.

Imagine the scandal that could be brewing now that he has become the Pope.

As reported earlier today by the Daily Mail:

[T]he most damning criticism of the new Pope comes  from the Argentine human rights lawyer Myriam Bregman, who has accused him of  allowing his own Jesuit priests to be rounded up and tortured by the junta death  squads, and of failing to intervene when families begged him to help find babies  kidnapped by the regime.

Bregman went on to note that church leaders, to include Bergoglio, backed the military regime although they knew exactly what was happening stating: “The dictatorship could not have operated this way without this key support.”

Bergoglio led a group of bishops from Buenos Aires who published an apology in October last  year acknowledging their failure to defend their members from the atrocities of the dictatorship, but most in Argentina consider that to be far too little too late.  Then there is the fact that Bergoglio refused to give evidence against the regime about the events of the Dirty Wars until 2010 and even then, his answers were considered by many to be too evasive and self-serving.

This very likely could be due to the additional allegations that Bergoglio failed to prevent the torture of Orlando Yorio and Francisco Jalics, two of his own Jesuit priests who were seized by the military in 1976 for their support of what the regime considered to be left-wing liberation theology.

History can be a tricky thing ever subject to available information, documentation and memories coupled with interpretation.  It remains to be seen what verifiable connections, if any, exist between Pope Francis I, the Argentine generals and the Dirty Wars, but it could prove to be a rather dirty story by the time it all unfolds.