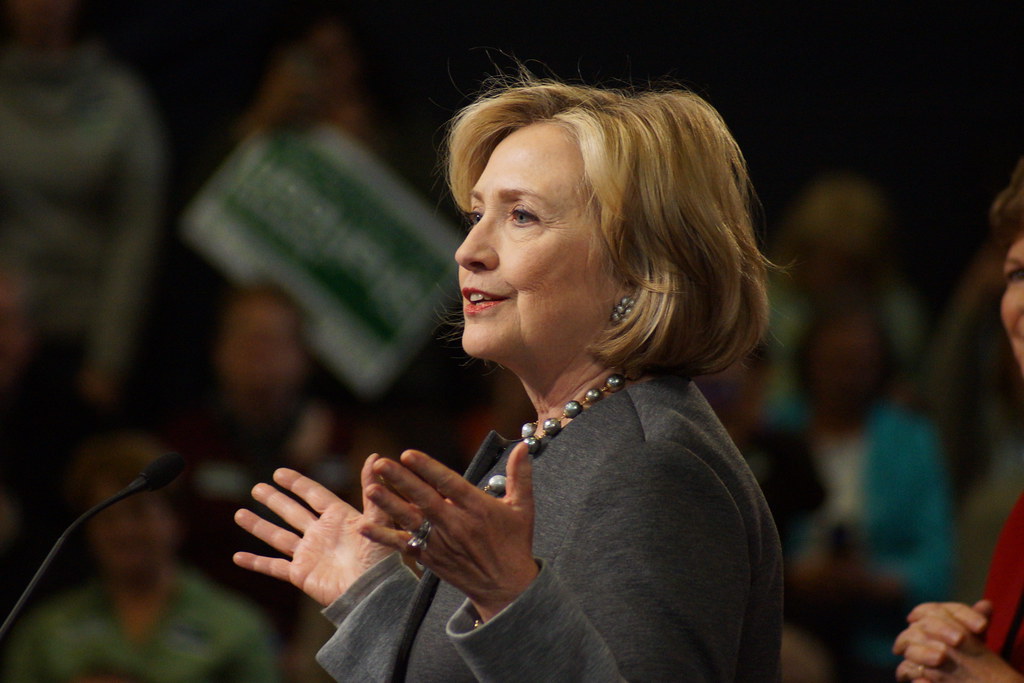 The latest hatchet-job on Hillary Clinton is set to strike next Tuesday, October 13th, in the form of a new book written by conservative political strategist Roger Stone.

As the New York Post reports the book, “The Clintons’ War On Women” alleges that “the real Hillary Clinton is so volatile and prone to violent outbursts that she terrorizes staff, Secret Service agents and even her own husband,” and goes on to detail other “more fantastical rumors that have dogged the Clintons for years.”

It is true enough that there have been rumors for years about the volatile nature of the Clinton marriage, but the focus of this article is on Stone and his controversial past and not the Clintons themselves. Considering Stone’s tainted past, one could reasonably make the case that anything the man has to write or say is suspect.

Born in 1952, Stone is principally known for his use of opposition research, usually for Republican candidates, as a political consultant and strategist. He is currently a member of the Libertarian Party but was a Democrat as a young child and then a Republican for decades after reading Barry Goldwater‘s “Conscience of a Conservative,” and volunteering for his presidential campaign in 1964 at the tender age of twelve.

His political wranglings first manifested at an early age when he lied to classmates to further John F. Kennedy’s presidential campaign. The Washington Post reported in 2007 that “Stone has been mixing politics and chicanery for so long that the combination seems woven into his DNA,” adding that “In the 1960 election — before he could spell the word ‘ideology’ — his school held a mock vote. He was a Kennedy fan and he campaigned for the guy just the way he would for others in the future.”

“I remember going through the cafeteria line and telling every kid that Nixon was in favor of school on Saturdays,” Stone says. “It was my first political trick.”

His political ambitions manifested themselves at an early age when, as a junior in high school, he manipulated the ouster of the class president and then succeeded him. The story was recounted by The New York Times in a 1999 article about Stone, written while he was serving as director of the Donald J. Trump Presidential Exploratory Committee.

When it comes to political shrewdness, Mr. Stone was precocious. As a junior, then vice president of his northern Westchester high school, he manipulated the ouster of the president and his own succession. Running for re-election as a senior, ”I left nothing to chance,” he said. ”I built alliances and put all my serious challengers on my ticket. Then I recruited the most unpopular guy in the school to run against me. You think that’s mean? No, it’s smart.”

Referring to Stone as “the ego behind the ego in a Trump gamble,” The New York Times goes on to describe Stone as:

[T]he corporate and political fixer who, at 19, was an entry-level dirty trickster for Richard M. Nixon; whose 30th birthday party was given at the ”21” Club by Roy Cohn;1 who consulted on campaigns for Ronald Reagan, George Bush and countless lesser Republicans; and who cites, among his shining moments, his successful $27 million strategy for the United States Sugar Corporation to defeat a penny-per-pound tax on sugar to help restore the Everglades.

‘It was a superb program to tell the voters why not to vote for it,’ he fondly recalled.  ‘How do you know the money will really go to the Everglades? These politicians in Tallahassee, you can’t trust them.’

In 1972, Stone was able to hit up Jeb Magruder2 for a job with Richard Nixon’s now infamous Committee for the Re-Election of the President (CRP, or CREEP) after inviting Magruder to speak at George Washington University. (Magruder would later plead guilty to conspiracy and serve time in a federal prison for his role in the Watergate Scandal.)

An exuberant negative campaigner, his political career began in earnest when Stone donated money to the primary campaign of a Nixon rival using the name of a left-wing group, the Young Socialist Alliance3, and then mailing the receipt to a newspaper, the Manchester Union-Leader. Later in the campaign, he was able to get a spy hired to serve as a driver for Hubert Humphrey, Nixon’s Democratic opponent in the general election. According to Stone, during the day he was officially a scheduler in the Nixon campaign, but: “By night, I’m trafficking in the black arts. Nixon’s people were obsessed with intelligence.”

Recruited to work for Ronald Reagan’s presidential campaign in 1979-80, Stone was reportedly given a suitcase by Roy Cohn and dropped it off at the office of an influential lawyer within the liberal circles in New York. Years later after the statute of limitations had passed, Stone later admitted that: “I paid his law firm. Legal fees. I don’t know what he did for the money, but whatever it was, the Liberal party reached its right conclusion out of a matter of principle.”

Stone went on to form Black, Manafort, and Stone, a political consulting firm that has been described as “instrumental in the success of Ronald Reagan’s 1984 campaign.” In 1985 the firm was joined by Lee Atwater, one of the highest-profile conservative political consultants of the 1980s and architect of the Southern Strategy4, the Republican effort for winning the vote of racists without appearing to be racist themselves.

Time Magazine reported in 1992 that Stone was involved with the controversial Willie Horton5 advertisements used by George H.W. Bush’s 1988 presidential campaign to discredit his Democratic opponent, Michael Dukakis, although some question remains as to Stone’s exact involvement — if any.

In a 1989 effort to assist local New Jersey Republicans, Stone “designed a direct mail piece with government-style writing that said, ”important tax information enclosed.” It warned homeowners that their taxes had doubled, courtesy of the Democrats.

Fast-forwarding to 1996, Stone was forced to resign as  Robert Dole‘s volunteer spokesman for his presidential campaign after it was reported by The National Enquirer that he had placed ads and photographs in several swingers publications seeking partners for himself and his second wife. Stone initially denied the allegations, telling Good Morning America that the culprit was a servant, stating:

However, in a subsequent interview in 2008 with The New Yorker, Stone admitted that the ads were his.

Stone also claimed in that same interview that Secretary of State and Bush family confidant James Maker recruited him to oversee the Miami-Dade County recount during the disputed 2000 presidential election. An August 2007 article in The New York Times reported that:

During the Florida recount in 2000, George W. Bush’s campaign enlisted Mr. Stone and his wife, Nydia, who is of Cuban ancestry, to rally support among Cuban exiles in Miami, according to Jeffrey Toobin’s “Too Close to Call,” a book about the recount battle. Mr. Stone was also instrumental in organizing the so-called Brooks Brothers Riot, the book said, when hundreds of Republican activists stormed a county election office in Miami and demanded that workers there cease recounting presidential ballots.

The New York Times also reported that Stone “had an unlikely political relationship with the Rev. Al Sharpton during his 2004 run for the presidency,” a claim that was backed by some of Sharpton’s aids who said that Stone “played a central role in the campaign.” Stone claimed his role was greatly exaggerated, and Sharpton stated that:

I’ve been talking to Roger Stone for a long time. That doesn’t mean that he’s calling the shots for me. Don’t forget that Bill Clinton was doing more than talking to Dick Morris.

However, it has been suggested that Stone was actually working for Sharpton as a means to undermine the Democratic Party at the time.

In 2007 Stone was serving as a top adviser to the majority leader of the New York State Senate, Joseph Bruno, but was forced to resign after allegations emerged that he had been threatening Eliot Spitzer, who was running for governor on the Democratic ticket at the time. There were other allegations that Stone had left an expletive-filled voicemail to Eliot’s father, Bernard Spitzer, threatening him as well. Stone denied the allegations but eventually resigned from his position as a consultant to the New York State Senate Republican Campaign Committee, at Bruno’s request.

The list continues, but let us end with an earlier attack by Stone on Hillary Clinton.

In January 2008, Stone founded an anti-Hillary Clinton 527 group6 with an intentionally deliberate obscene acronym: Citizens United Not Timid. The group had a website at the time (www.citizensunitednottimid.org) which has long since been shut down. Salon reported at the time that:

Notorious Republican dirty trickster Roger Stone has launched a 527 political organization called Citizens United Not Timid (aka CUNT) to educate the public about “what Hillary Clinton really is.” The organization’s sole purpose? To sell $25 T-shirts emblazoned with the organization’s charming name and its red, white and blue logo. The logo is supposed to evoke a woman’s crotch, but it looks more like an elephant’s anus (a perfect image for Stone’s role in the Republican Party).

Some are ironically celebrating Stone’s stupidity — expecting that the blowback from his use of the C-word will be so great as to ensure Clinton’s nomination and turn every last Republican soccer mother into a card-carrying feminist. (From the Carpetbagger discussion forum: “If Stone didn’t exist, we’d want to invent him: if there is a single soccer mom left in the Republican party by the time he is through, I’ll be surprised.” From the Muckraker discussion boards: “Way to go, Stone! Nice GOTV [Get Out the Vote]effort for the women. LOVE it!”)

Returning to the initial context of this article, Stone’s latest literary endeavor – “The Clintons’ War On Women” – one might be able to make a circumstantial case that some of his claims have merit. However, given the extent of his background – I wouldn’t hold my breath.