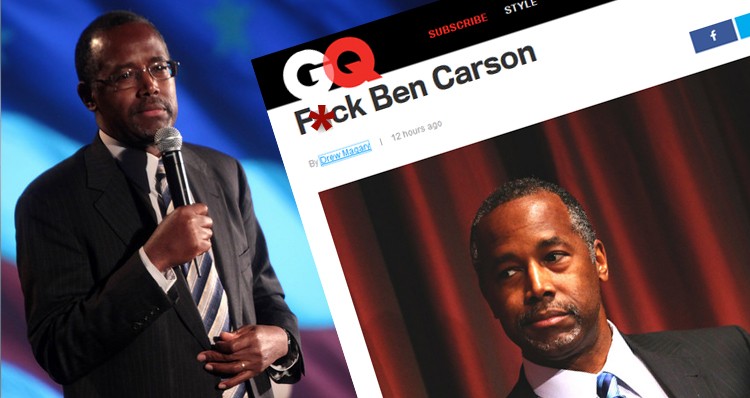 There is no doubt what GQ thought about him entering politics after they posted an article headlined “F*ck Ben Carson” – but without the asterisk.

Carson is currently Trump’s Housing Secretary, but the primary season was in full swing at the time and Carson was a Republican hopeful competing with Trump for the Republican nomination.

You know, the only thing more alarming than Donald Trump leading the Republican presidential field is the fact that Ben Carson is the guy right behind him. While establishment puds like Jeb! Bush and Marco Rubio can’t decide if they want to beat Trump or emulate him, the Good Doctor made it clear this week that he is not only willing to replicate Trump’s signature brand of hot-garbage-spewing, but he’ll say even DUMBER shit.

Magary went on to cite a series of controversial remarks by Dr. Ben Carson regarding the shooting at a community college in Oregon that left nine victims dead and nine others injured before the shooter allegedly killed himself.

He continued, writing: “Here’s the thing: I don’t believe Carson when he says any of this,” adding: “You are now bearing witness to an arms race of stupid, because stupid is in such high demand from the GOP base at the present moment. Stupid is what gets you attention, and attention is what gets you better polling numbers.”

Noting that “Donald Trump, for all of his bluster, is at least authentically stupid,” Magary continued.

With monthly page views in the millions and nearly 2 million Facebook fans, controversy raged on the magazine’s Facebook post at the time with conservatives posting comments such as:

You know what, I’m fucking done with GQ on Facebook, I don’t know what kind of liberal arts college educated, entitled, hipster asshole writers you dipshits are “employing” but this is completely ridiculous. And before anyone starts, I’d be writing the exact same thing if it said “fuck Hillary Clinton” GQ stands for Gentleman’s Quarterly, not “Assholes Daily”. To pass off a tag line like this as interesting, informative or anything resembling journalism is an affront to writers or readers anywhere. Regardless of ones political leanings, Ben Carson is a brilliant doctor and surgeon, to call him stupid is a fallacy. Uninformed, maybe but not stupid. Goodbye GQ, catch you when you aren’t run by loser blog writers and get back to fashion.

“Classy” article title from a trash source. Stick to what you’re good at GQ, which is not politics. *unfollowed*

While liberals and progressives were posting comments such as:

Dear Stupid Conservatives, no one cares if you unfollow. No one likes you. Go back to your desolate and pathetic corner of the internet where Obama’s a Muslim and Benghazi is a scandal.