Ammon Bundy Whines Like A Big Baby From Jail 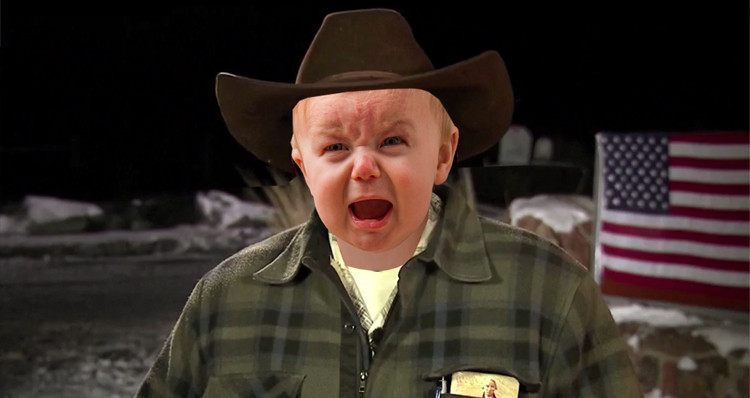 Ammon Bundy is whining about government overreach from his Oregon jail cell.

Ammon E. Bundy, the eldest son of Nevada rancher Cliven Bundy, was indicted this Wednesday by a federal grand jury along with his younger brother Ryan and two other conspirators.

The Oregonian reports that possible maximum penalties for the Nevada-based charges are as follows:

“According to the U.S. Attorney’s Office in Nevada, the maximum penalties for the Nevada-based charges range from five years to 20 years, with $250,000 in fines for each charge.

Meanwhile Ammon Bundy issued the following statement from his jail cell on Thursday, essentially saying the government is picking on him and blaming everyone but himself for his current predicament.

His statement is as follows:

“This is Ammon Bundy. I just wanted to give you a statement about the NV indictment: the Bundy Ranch. Again, just to help people understand that this is just a continuation of government trying to protect its own power, government taking land that does not belong to them from the people. This is a continuation of them overreaching–going far beyond their constitutional bounds and showing that they are willing to use the court system to prosecute people that were defending their rights; defending their property. And don’t forget what happened at the Bundy Ranch: that they killed cattle, that they tased people, that they threw women on the ground, that they sicced their dogs on pregnant women, that they gang-beat men to the ground for filming them with their iPad. And that they set up a First Amendment right area and saying that you cannot protest outside those corrals. Don’t forget what happened at the Bundy Ranch and how important this is that we make a stand. Thank you.” – Thursday, Feb. 18, 2016

The Bundy Ranch Facebook page posted an earlier recording of a statement from Ammon claiming religious persecution this time instead of government overreach regarding property.

“It is obedience to the Lord and following him that has enraged our adversaries to bind and hold us away from our families, our place of worship and to keep us from the sacred support that we owe our wives and children. However, even in this time of bondage and tribulation we have grown closer to the Lord.”

You can listen to the full statement, below: