Rubio Mocks Trump, Says He Should Sue Whoever Did That To His Face – Video 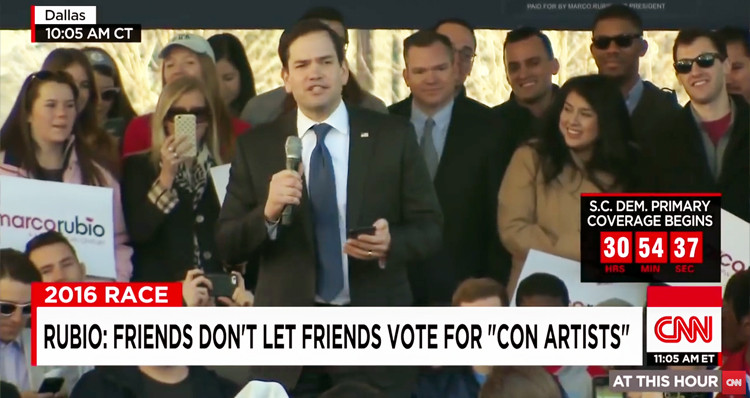 “You guys wanna have a little fun today?” Rubio asked the crowd waving around his cell phone.”What does Donald Trump do when things go wrong?” he asked the crowd. “He takes to Twitter. I have ’em right here. Let’s read some. We’ll have fun.”

Reading the first tweet, Rubio mocked Trump for using the word “chocker” when referring to him.

“Lightweight Marco Rubio was working hard last night,” he read to the crowd, interjecting “That’s true.” He returned to Trump’s tweet, reading: “The problem is, he is a chocker. And once a chocker, always a chocker.”

Smiling, Rubio told the crowd that he assumed Trump was meaning to call him a “choker.”

“He spelled ‘choker’ c-h-o-c-k-e-r ‘chocker,'” he explained to the laughing crowd.

After talking about Trump having to apply makeup backstage at the debate to conceal a “sweat mustache,” Rubio continued his mockery of Trump’s poor spelling.

Rubio continued mocking Trump at another rally in Kennesaw, Georgia.

“Last night he was actually pretty calm after I punched him around a little bit,” he added, referring to Trump. “He’s learning how to spell, I guess. But he’s flying around on Hair Force One and tweeting.”

“So here’s the one tweet he put out, he put out a picture of me having makeup put on me at the debate,” Rubio said, referring to a message Trump tweeted on Friday.

“[It’s] amazing to me that the guy with the worst spray tan in America is attacking me for putting on makeup,” Marco Rubio said with a mischievous grin, adding: “Donald Trump likes to sue people, he should sue whoever did that to his face.”

“He’s the only one running for president that’s ever hired illegal immigrants to work for him,” he said, adding: “Oh no wait, he’s going to protect you from immigrants taking your jobs. Well why is he hiring foreigners to do the jobs at his hotels that Americans are trying to get?”

He also restated his claim that Trump is a “con artist” that would ultimately betray the Republican Party.

You can watch Rubio in action in Georgia, below: