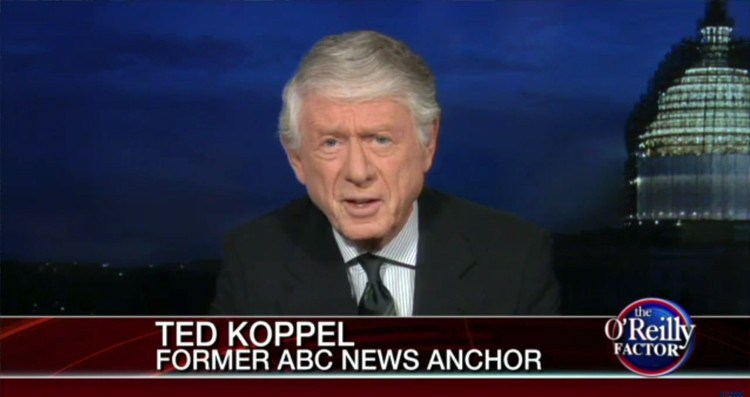 The interview began with O’Reilly asking Koppel how he would conduct an interview with Republican front-runner Donald Trump.

“I’ve interviewed him a number of times,” O’Reilly said of Trump. “Not an easy interview. How would you do it?”

TED KOPPEL: You and I have talked about this general subject many times over the years. It’s irrelevant how I would do it. You know who made it irrelevant? You did. You have changed the television landscape over the past 20 years — you took it from being objective and dull to subjective and entertaining. And in this current climate, it doesn’t matter what the interviewer asks him; Mr. Trump is gonna say whatever he wants to say, as outrageous as it may be. And the fact of the matter is, his own audience, as much as anything, is not even a television audience.  It’s an audience on Twitter. They deal in messages of 140 characters or less, which keeps it nice and simple.

BILL O’REILLY: But okay – your old network, ABC, does interview Mr. Trump on a regular basis and you know, it comes in and you’ve got to come in with a strategy with you. You have to come in with sharp questions. And you’re right, maybe his supporters don’t care what he says. However, our job whether I’m a commentator or a reporter is to get as much information number one, and number two – show the viewer who the person really is. So then I’ll go back to – he’s sitting on Nightline and you’re post[ed] right opposite to him – how do you do it?

TED KOPPEL: Well, the first way you do it is not in the interview — you do it by some reporting. It’s an old-fashioned concept, but I think demonstrating who and what Mr. Trump is and what his policies really amount to is something you don’t do in an interview. He doesn’t answer the questions. I’ve seen any number of your colleagues and mine ask him very pointed questions and do it [in] perfectly professional fashion. He just ignores the question. When was the last time you have heard Donald Trump spell out a real policy on anything other than, ‘We’re gonna be the best, we’re gonna be the greatest, I’m gonna negotiate the best deals you’ve ever seen.’ There is no substance in any of that, and nobody among his followers seems to care about that.

BILL O’REILLY: It’s true that he is getting a pass because he’s not a traditional politician, and he’s appealing to emotion which is a brilliant strategy in this age of dissent in America. Bernie Sanders is doing the same thing. Let’s be honest. Bernie Sanders’ programs are just as wild as some of Mr. Trump’s programs.

TED KOPPEL: But he’s coming in a poor second, and Trump is way ahead of the pack, so it does make a difference. Nobody, nobody is able to hold Donald Trump to account because he’s not playing by the traditional rules. So…

BILL O’REILLY: Is that a smart thing for him to do if he wants to be president?

TED KOPPEL: It’s obviously been an incredibly smart thing. I mean, I don’t want to pretend that I’ve been predicting all along – that I’ve been predicting that he’s going to win. Quite the contrary – I couldn’t image that he would win. At this point I find it hard to believe that he won’t. I still think that the Republicans are going to do everything that they can to take it away from him at the convention if need be.

BILL O’REILLY: But as I’ve said if they do that, they lose the election because thous – millions of Trump supporters will say “you know what – the fix is in.” And you know what? Trump himself would run on a third party if that happened, and that would destroy the GOP.

TED KOPPEL: He might. But Bill, what I think they’re more worried about right now is losing the Senate and losing the House.

BILL O’REILLY: But with all of that defection, of all the Republicans that support Donald Trump not voting for any Republican – you got to be very very careful. Now would you as an anchor man – you, you obviously don’t approve of Donald Trump. And I tell everybody “look” – because he gets angry at me sometimes because I will have commentators on the program that don’t like Trump; and I point out “listen, it’s their opinion – alright – and they’re entitled to their opinion.” And I’m being fair. I ask their opinion and I challenge. But I have just as many on who like Trump – like Andrea Tantaros – than don’t. But you’re in the chair now, not when you were back with Nightline, but today. All the things that you have pointed out. It’s a whole different ballgame on cable TV. Commentators like me have just ruined this country. I cop to that.

TED KOPPEL: It’s true. You have.

BILL O’REIILLY: I’ve ruined everything. Although the journalists outnumber the commentators by about 50-to-1 and maybe the journalists are not as powerful as they should be. But anyway would you show your disdain at a certain point for a certain candidate – it doesn’t have to be Donald Trump – could be Bernie Sanders, could be anybody. Would – under these new rules in television is that allowed?

TED KOPPEL: No, I don’t like the new rules of television, and quite frankly, I don’t think I would adhere to the new rules of television. It’s not a question of what I personally think, it’s a question of is there any substance there. You asked me what questions would I ask. I think the first thing that has to be demonstrated is a little bit of journalism. Go into some of the details of who and what Mr. Trump actually is; what those policies amount to; and then after you’ve laid it out – you remember on Nightline that’s what we used to do.

BILL O’REILLY: You opened up with a piece. Sure.

TED KOPPEL: Exactly – a five or six minute piece that lays out the issues. Then you talk to the candidate and say “why is it we don’t have anything more than just fluff?”

BILL O’REILLY: Okay, but the problem is that now the network news on the three – CBS, NBC and ABC – perceived to be liberal – so the people you might want to persuade are saying “you know they don’t like him, and they’re going to twist their reporting; and it’s the same thing with The New York Times and The Washington Post – that a lot of the straight reportage that used to be accepted is now questioned because of this perceived liberal bias. Correct?

TED KOPPEL: And the fact of the matter is, Bill, you deserve both credit and you have to accept responsibility. For the past twenty years, as I said at the outset, you have been changing the landscape. The fact of the matter is – it’s hard to believe these days – but thirty years ago a television network anchor, Walter Cronkite, was the most trusted man in America. There is not a man today, yourself included, on television as an anchor who is trusted by anything approaching a majority of the American people.