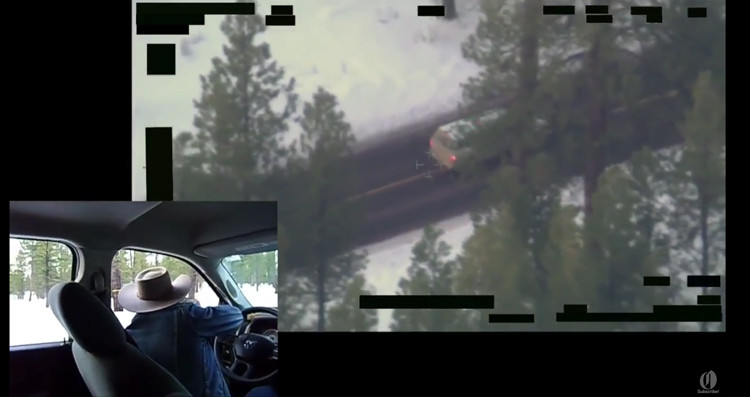 In a video shown at a Deschutes County Sheriff’s Office press conference on Tuesday, the aerial FBI video of the LaVoy Finicum shooting has been synched with a cellphone video Shauna Cox recorded from within Finicum’s truck.

Bretzing stressed that “no one, from the Director of the FBI down to each and every employee who was working in Harney County, wanted this situation to end in violence or death.”

“However, Mr. Finicum chose to break the law, put other people’s lives in danger, and, as the investigation shows, provoke a confrontation with law enforcement. As the sheriff and DA have shown, the threat Mr. Finicum posed to OSP troopers and agents along Highway 395 on that day was real and imminent, and certainly justified the use of deadly force by law enforcement.”

The Guardian reports that Malheur county district attorney, Dan Norris, added: “I have concluded that all six shots fired by the Oregon state police – the three into the truck and three that shot Mr Finicum – are justified.”

Questions still remain about the shooting and according to The Guardian, “Local officials also revealed that FBI officers had fired shots but did not disclose that fact to investigators after the incident – prompting an ongoing federal investigation into the FBI’s actions.”

You can watch the two videos that have been synched, below: