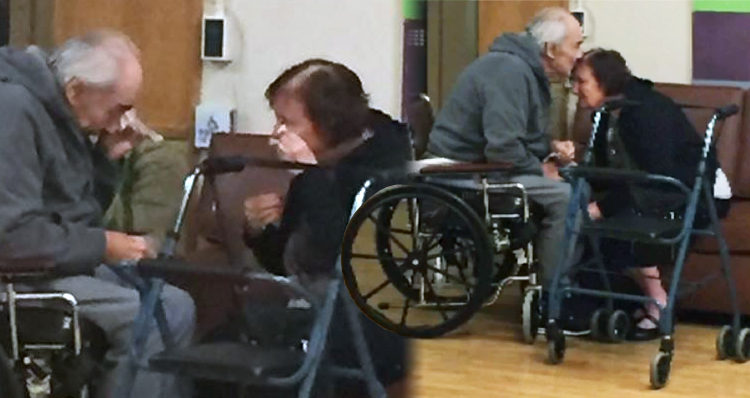 An elderly couple married for 62 years has been forced apart because there is not enough space for them at the same residential care home.

A Canadian couple, married for over six decades, has been forced to live apart due to a lack of space in the same nursing home.

CTV News reports that “Wolf and Anita Gottschalk have been married since 1954” and, according to their granddaughter, Ashley Bartyik, have rarely spent any time apart.

“After 62 years together, they’re inseparable. They do everything together,” she says.

Wolf is on a waiting list to move into The Residence at Morgan Heights, the nursing home where Anita is cared for, “but the Frazer Health Authority can’t say when that will happen, according to CTV News.

CNN reports that: “Wolf Gottschalk, 83, suffers from dementia and was also diagnosed with lymphoma this week. Though the memory of his wife has not faded, Ashley is afraid it eventually will.”

“The time is ticking now more than ever before,” she told CNN.

Every other day a family member, usually Bartyik who cares for the couple, drives Anita 40 minutes to see Wolf and “each of these reunions inevitably ends in tears.”

“My grandma can’t even kiss him goodnight now. He calls out for her when he sees her,” says Bartyik.

CTV News reports that: “With Wolf needing much more care than Anita, it’s not clear whether his wife’s nursing home will be able to accommodate him. Fraser Health says it has been working to get the couple together, but notes that not a single care space has opened up at The Morgan since Anita moved in.”

“We certainly understand how heartbreaking this is for the family. It’s upsetting for us as well,” spokeswoman Tasleem Juma told CTV News in an email.

Frustrated, Bartyik posted a photo of her grandparents on her Facebook page.

“Friends please read!” she begins, explaining that “This is The saddest photo I have ever taken.”

“This is my Omi and my Opi. As you can see they are both wiping away tears! But why? It was taken in Surrey at Yale road, a transitional facility for people waiting to get into nursing homes, that’s where my Opi is! After 62 years together in marriage they have been separated for 8 months due to backlogs and delays by our health care system, whom have the power to have my grandpa moved to the same care facility as my grandmother.

“They cry every time they see each other, and it is heartbreaking. To make it worse, TODAY he was diagnosed with Lymphoma. Besides that limiting his time and making this more urgent, His Dementia is growing ever stronger each day, but his memory of my grandmother has not faded a inch…yet.

“We are afraid however that if they are living apart much longer, his memory of her won’t stay. This has been a strain on our family, making the 30 minute commute to bring her to see him, every second day, so he does not forget her. Now with the news of cancer, our fight to have them in the same facility is even more urgent. He isn’t even getting proper care where he is, including no physical therapy which we were promised (the only reason he is in a wheelchair is because it has been 8 months of no walking!!)

“They deserve this! Financially, physically and emotionally exhausted, me and my family are begging for your help my friends. We have contacted our local MLA, called Fraser Health and done in person inquiries, but none of our questions and concerns have been answered. We want justice for my grandparents who after 62 years together deserve to spend their last moments in the same building.

“Please share this and tag anyone that needs to see this post to get the help we need! @fraserhealthauthority”