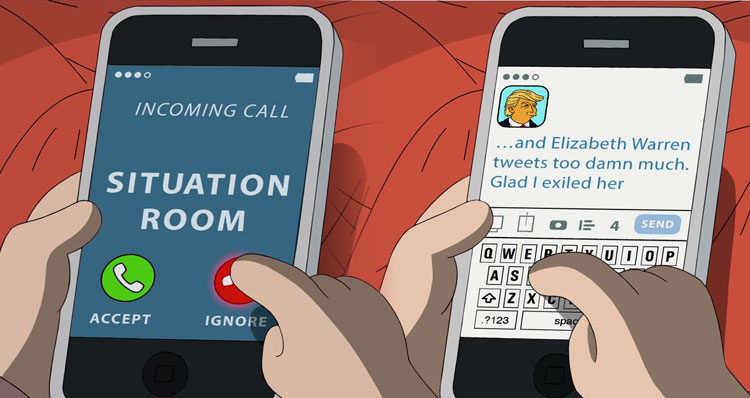 The story of how Homer Simpson became a Democrat as The Simpsons takes on the 2016 presidential campaign.

“The Simpsons” took time off from their summer vacation to mock Donald Trump in a scathing video posted.

As NBC News reports the show,” known for its satire of the world’s brightest stars and politicians,” has “released a short episode on YouTube parodying the notorious ‘3 a.m. call’ made famous by Hillary Clinton’s 2008 campaign for president.”

As Bustle reports, “The original political ad was made famous during the 2008 presidential election, when Clinton — tasked with protecting America’s trove of sleeping children — asserted that she was the best candidate to answer a telephone call to the White House at 3 a.m.”

The animation begins with Homer and Madge Simpson kissing bed.

“Yep, it’s the American way,” Homer responds reaching for the remote control for the television.

The television is playing a campaign ad. “It’s 3 a.m. and the phone in ringing in the White House,” the ad begins. “Who do you want answering that call?”

Bill Clinton answers the phone: “Hello, the Situation Room? I’ll be right there.” He quickly hands the phone to Hillary telling her “It’s for you.”

“Yes, from now on it’s always for me,” she responds.

“Or Donald Trump?” the narrator continues as the scene shifts to Donald Trump tweeting about Elizabeth Warren.

A copy of “Great Speeches” by “A. Hitler,” is lying next to him – a reference to a 1990 Vanity Fair article which reported that “Ivana Trump told her lawyer Michael Kennedy that from time to time her husband reads a book of Hitler’s collected speeches, My New Order, which he keeps in a cabinet by his bed.”

His phone begins ringing. “Not now, I’m on Twitter,” Trump barks as the animation shows him ignoring a call from “The Situation Room.”

Ignoring the call, he continues his tweet: “… and Elizabeth Warren tweets too damn much. Glad I exiled her.”

He then barks a list of demands into his phone: “Oh, and put my name on the Lincoln Memorial, make Chris Christie eat a worm just for laughs, disband NATO, and make me some scrambled eggs in a gold plate.” While that list may seem absurd, Trump did talk about the possibility of disbanding NATO earlier this year.

As The Wall Street Journal reported on April 2nd: “Many countries are not paying their fair share. That means we are protecting them, giving them military protection,” Mr. Trump told an a crowd of about 650 people at the Racine Civic Center. “They’re ripping off the United States. And you know what we do? Nothing. Either they have to pay up for past deficiencies or they have to get out. And if it breaks up NATO, it breaks up NATO.”

Trump eventually takes the call from the Situation room, but before heading down a team of stylists prepare him – complete with lip injections, makeup, a spray-on tan, and fake life-sized hands (a reference to a years long controversy regarding his so-called “small hands.”)

Finally, a small long-haired dog is retrieved from a bedside cage and place on top of his bald head, resolving the controversy surrounding his bizarre hairdon’t.

Hour upon hour passes and the phone rings again, and Trump is heard responding: “We’re too late? The Chinese fleet is advancing? Just build another wall. Yes, in the ocean, loser.”

The campaign ad ends with the following message: “Paid for by Americans who are really starting to miss Obama.”

The animation returns to Homer and Madge with Homer declaring: “And that’s how I became a Democrat.”