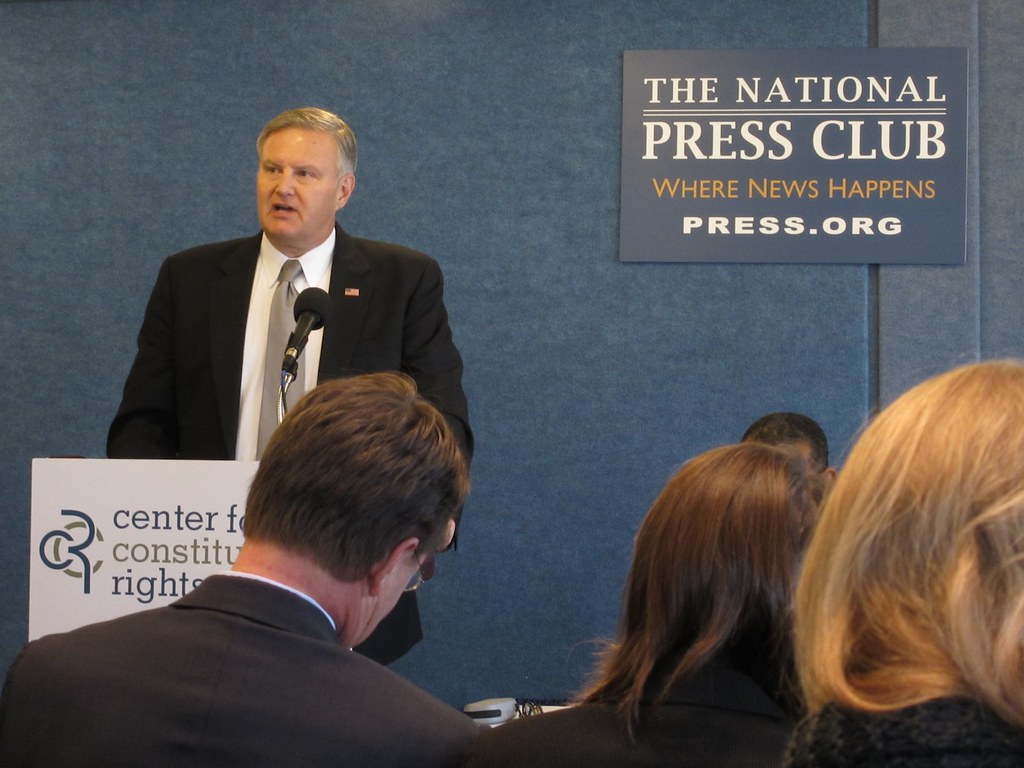 Colonel Morris D. Davis is a retired US Air Force officer and lawyer who served as the third Chief Prosecutor of the Guantanamo military commissions from 2005 until 2007.

An outspoken critic of torture, Col. Davis resigned his position as Chief Prosecutor in October 2007. Considering waterboarding a form of torture, he had created a policy that evidence obtained from that technique would not be admissible as evidence before the military commission.

Then, as The Star reported in 2008, “Davis said he resigned hours after he was put in a chain of command beneath U.S. Defense Department General Counsel William Haynes, one of several officials who had encouraged the use of evidence even if it was gathered through waterboarding – an interrogation method that simulates drowning.

“The guy who said waterboarding is A-okay I was not going to take orders from. I quit,” Davis said.

Col. Davis retired from active duty in October 2008 and currently serves as an assistant professor at the Howard University School of Law in Washington, DC and is a frequent contributor to websites such as The Guardian where he has published numerous op-eds and other criticisms of the Guantanamo Military Commission process. Col. Davis has been vocal in his support of the American POW-Taliban prisoner swap that won Bowe Bergdahl‘s release in 2014.

Like many before him – Hillary Clinton, Elizabeth Warren and others – Col. Travis frequently takes to his Twitter page to taunt Republican presidential hopeful Donald Trump.

Below are a few favorites from the last few days.

On Sunday and Monday he launched a series of tweets mocking Trump in the context of the 2016 Rio Olympic games:

.@realDonaldTrump: "I wanted to be an Olympic swimmer, but with my tiny hands I can only slap at the water and move slower than smells."

.@realDonaldTrump: "The Olympic triathlon was my Vietnam … in that it looked like I could get hurt so I said "hell no send somebody else."

.@realDonaldTrump: "Media treating fabulous Russian gymnasts like they do me by showing mistakes, shameful bias for the low-energy US team."

He alluded to Trump’s birther nonsense:

Don't we deserve the long-form visas so we know if an illegal is sleeping in the WH with the CINC? @realDonaldTrump https://t.co/0nfUORrY02

He also blasted the phony money for hostages allegations:

As a general rule, I expect most ransoms don't get paid by giving the kidnapper back some of the kidnapper's money. https://t.co/ygyA9ux2l4

And took on Trump’s latest endorsement:

Top Nazi leader: @realDonaldTrump will be a 'real opportunity' for white nationalists. https://t.co/cn2z1kS71s

He has also taken on recent efforts by Republicans to control their candidate:

Once they put @realDonaldTrump on Thorazine and made him read from a prepared text he was just swell … and boring. https://t.co/ShHp2NElEE

And an all-time favorite talks about Trump’s support from presidents:

.@realDonaldTrump: @HillaryClinton is a "horrible human being." Great leaders are on the Trump Train.@CNN @CNNSotu pic.twitter.com/hKtaHooH6N