What Was Your Favorite Clinton Burn Of The First Debate? – Poll 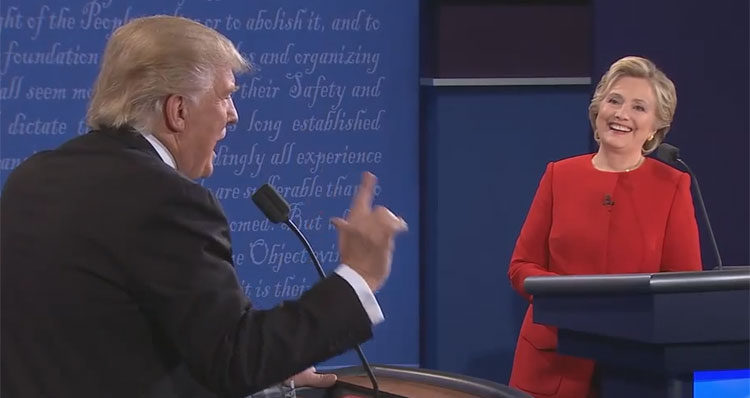 Hillary Clinton chipped away at Donald Trump’s ego bit by by during Monday’ debate, what was your favorite moment?

Clinton was able to visibly disturb Trump from the starting gate by calling him “Donald” instead of the “Mr. Trump” he prefers, as noted by WIRED during their live fact-check of the debate.

She was also able to clearly annoy him by referring to his economic plan as “Trumped-up trickle-down, because that’s exactly what it would be.”

At one point, Clinton seemed to be making an apology for Trump’s behavior during the campaign – an attempt to assuage growing concerns in the world about some of his statements such as his remarks about not honoring America’s NATO obligations:

It is essential that America’s word be good. And so I know that this campaign has caused some questioning and worries on the part of many leaders across the globe.”

Clinton clearly got to Trump when she referred to the “Trump-loophole” in his tax plan.

Clinton also went on to slam Trump over his refusal to release his income tax returns, accused him of living in his own reality, being a racist and a misogynist, taunted him by questioning his wealth – a known sore-spot for the thin-skinned billionaire, and all but apologized to the world for his frightening behavior during the campaign.

As Aaron Blake of The Washington Post wrote in their annotated transcript of the debate: “People who know Trump say this criticism stings him more than just about anything.”

Below is a poll asking your favorite burn from the debate. It would be great if you elaborate on your answer in the comments, particularly if you selected “other.”