December 6, 2016 by Samuel Warde No Comments 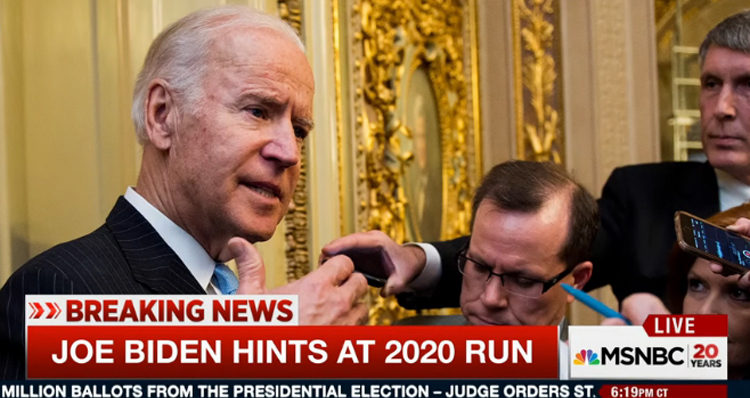 Vice President Joe Biden tells reporters he plans to run for President in 2020.

Vice President Joe Biden was presiding over the Senate on Monday while a bill was being considered that was named in honor of his son Beau who died of cancer last year.

NBC News’ reporter Kelly O’Donnell reports that it was an emotional moment as Biden exited the Senate floor. She adds that a group of reporters gathered around him asking him about “what did this mean.” O’Donnell reports that she said to the Vice President, “These are your final days in office. Did that add to the emotion?”

And as O’Donnell explains, Biden began talking about what it means for him in the Senate, and then he said “I’m going to run again.”

O’Donnell reports that members of the media “actually laughed, thinking he was teasing because we assumed his career on public life had come to an end.”

However, when asked by another reporter “are you going to run again,” Biden responded: “Yeah I am, I am going to run in 2020.”

“For what?” a reporter followed up. “For president – you know – what the hell man, anyway.”

O’Donnell said that she responded: “Mr. Vice President we are going to run with that if you drop something like that,” and Biden responded, “okay, go ahead.”

He was asked “are you kidding?” After “pausing for 4 long seconds as he considered what he was going to say,” he responded: “I’m not committing to not running. I am not committing to anything. I learned a long time ago, fate has a strange way of intervening.”

O’Donnell discussed the conversation with NBC host Chris Matthews and plays a recording of the Vice President making the remarks: