Elizabeth Warren Fires Back, Will Not Be Silenced – Video

February 8, 2017 by Samuel Warde No Comments 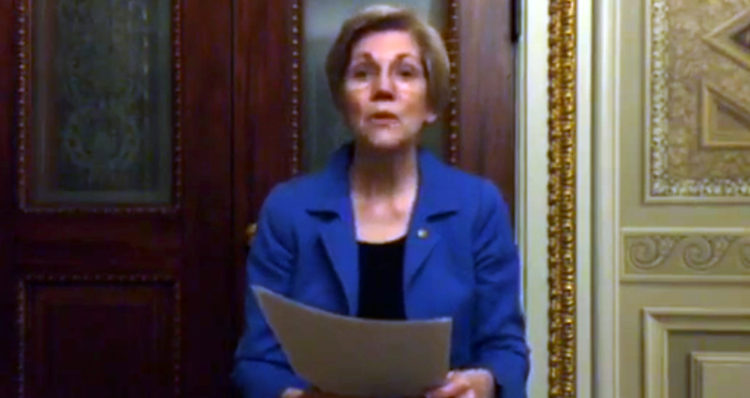 Elizabeth Warren fired back at Senate Republicans after they silenced her attempt to read a letter by Martin Luther King’s widow into the record.

As NBC News reports, “Senate debate on the confirmation of Sen. Jeff Sessions to be attorney general came to a screeching — but temporary — halt Tuesday night in actions that resulted in the punishment of Sen. Elizabeth Warren.”

Described by The Boston Globe as an “arcane rule,” Rule 19 says that senators are prohibited from “directly or indirectly, by any form of words impute to another senator or to other senators any conduct or motive unworthy or unbecoming a senator.”

As The Boston Globe continued, Warren addressed the Senate in opposition to Sessions’ appointment citing several issues “including accusations that he targeted black voters in an investigation.”

“He has made derogatory and racist comments that should have no place in our justice system,” she stated, adding: “To put Senator Sessions in charge of the Department of Justice is an insult to African-Americans.”

She quoted a 1986 speech by the late Senator Edward Kennedy (D-MA) calling Sessions a “throwback to a shameful era” and a “disgrace to the Justice Department.”

As The Hill reports, Sen. Steve Daines (R-MT), who was presiding over the the Senate during Warren’s speech interrupted her her, warning her that she was on the brink of breaking Rule 19.

She went on to read from a 1986 letter from Martin Luther King Jr.’s widow, Coretta Scott King, who accused Sessions of “a shabby attempt to intimidate and frighten elderly black voters.”

The letter, written to the Senate Judiciary Committee during Sessions’ failed confirmation hearing for a federal judgeship, went on to state that:  “Mr. Sessions has used the awesome power of his office to chill the free exercise of the vote by black citizens in the district he now seeks to serve as a federal judge.”

McConnell called for a vote on Rule 19 stating that: “The senator has impugned the motives and conduct of our colleague from Alabama, as warned by the chair. Senator Warren — quote — said Senator Sessions has used the awesome power of his office to chill the free exercise of the vote by black citizens.”

Warren responded that she was “surprised that the words of Coretta Scott King are not suitable for debate in the United States Senate.”

She asked for permission to continue, but McConnell objected; and the Senate voted 49-to-43, along party lines, to block her from continuing.

Tonight @SenateMajLdr silenced Mrs King's voice on the Sen floor – & millions who are afraid & appalled by what's happening in our country.

At around 11pm Eastern, Warren continued her protest against Sessions’ appointment by reading Coretta Scott King’s letter just outside the Senate chamber, streaming it on Facebook.

You can view her protest below and you can go here to “Read the letter Elizabeth Warren got rebuked for reading.”