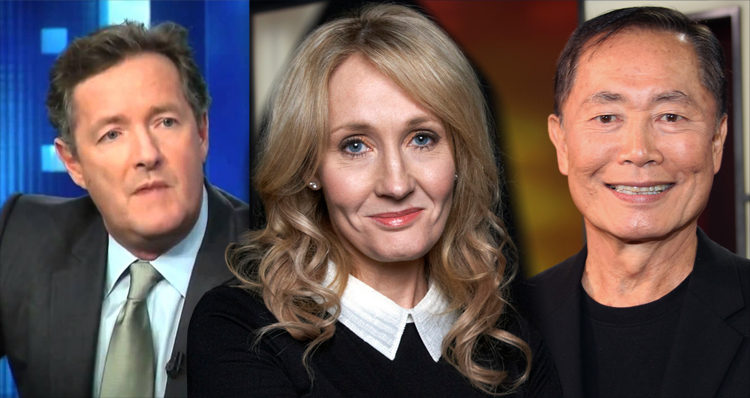 JK Rowling, George Takei and Piers Morgan engage in a fiery war of words on Twitter.

Famed “Harry Potter” author JK Rowling took to her Twitter page to mock controversial British journalist Piers Morgan after he was told to “f***-off” during a Friday appearance on “Real Time with Bill Maher.”

The panel was discussing Trump’s effort to ban immigrants from seven Muslim-majority countries. Morgan claimed Trump’s efforts were not a Muslim ban, at which point Australian comedian Jim Jefferies told him to “f***-off.”

Rowling took to her Twitter a few minutes later, writing: “Yes, watching Piers Morgan being told to f***-off on live TV is *exactly* as satisfying as I’d always imagined.”

Yes, watching Piers Morgan being told to fuck off on live TV is *exactly* as satisfying as I'd always imagined. https://t.co/4FII8sYmIt

Morgan initially tweeted back: “This is why I’ve never read a single word of Harry Potter.”

This is why I've never read a single word of Harry Potter. https://t.co/XUJBMs4KKm

Because you had a premonition that one day the author would roar with laughter at seeing you called out for your bullshit on live TV? https://t.co/8rkKSqJTnG

And went on to complain about Jefferies, Rowling and Takei:

I'm under attack from a comic who tells rape jokes, Sulu from Star Trek & an author who writes about wizards. What a morning.

New York Magazine weighed in on the spat:

In @jk_rowling vs. @piersmorgan one is a vocal national treasure the other is just uh, vocal. https://t.co/0O3Otwg0SQ

And Rolling Stone tweeted about the initial confrontation between Jefferies and Morgan:

Morgan continued his Twitter meltdown for several hours, posting tweets such as:

And then there’s this one:

The spat went on for hours and it is difficult to tell at this point if it has ended or not.

Let us know your thoughts in the comments below.