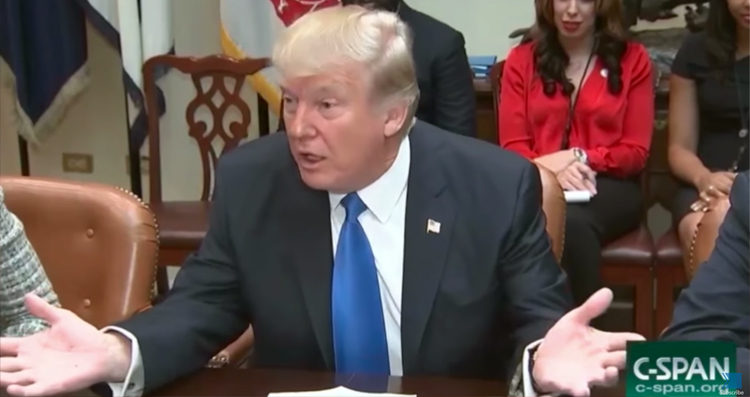 Trump gave a speech about the persecution of Donald Trump for Black History Month.

Trump gave a speech on the first day of Black History Month all but ignoring African-Americans – focusing instead on his war with the media and the big fat lie that he ended up “getting substantially more votes” from black voters than other Republican presidential candidate in history.

The Atlantic reports that Trump began his speech with a perfunctory mention of “the four most famous figures in black history with no meaningful elaboration.”

I am very proud now that we have a museum on the National Mall where people can learn about Reverend King, so many other things.  Frederick Douglass is an example of somebody who’s done an amazing job and is being recognized more and more, I notice — Harriet Tubman, Rosa Parks, and millions more black Americans who made America what it is today.  Big impact. I am proud to honor this heritage, and we’ll be honoring it more and more.

As The Toronto Star reports, “Trump did offer some words of praise for black Americans, saying, ‘Their story is one of unimaginable sacrifice, hard work, and faith in America.’ Returning to his association of black communities with crime, he also promised to ‘work very hard on the inner city,’ calling black communities so unsafe it is ‘terrible.’

However, as The Atlantic notes, “Within moments, he was off-topic, talking about some of his favorite subjects: CNN, himself, and his feud with CNN.”

Trump referred to Republican political commentator Paris Dennard in his remarks, stating that “Paris has done an amazing job in a very hostile CNN community; he’s all by himself. Seven people and Paris. I’ll take Paris over the seven. But I don’t watch CNN, so I don’t get to see you as much. I don’t like watching fake news. But Fox has treated me very nice, wherever Fox is, thank you.”

Turning to his favorite topic, himself, Trump stated:

If you remember, I wasn’t going to do well with the African American community, and after they heard me speaking and talking about the inner city and lots of other things, we ended up getting — I won’t go into details, but we ended up getting substantially more than other candidates who had run in the past years.  And now, we’re going to take that to new levels.

The Washington Post fact-checked his claim, giving it a rating of Three Pinocchios, writing that: “Trump is kidding himself if he thinks he did substantially better with African American voters. Perhaps he should be pleased he did not do worse, given some of his incendiary rhetoric. But it’s not anything to brag about.” 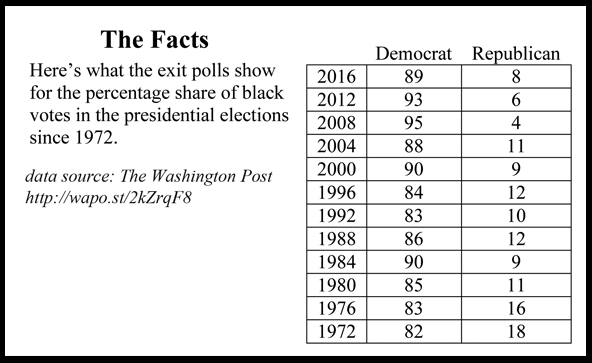 As The Atlantic concluded: “The gulf between Trump and his predecessors is particularly poignant, of course, in the wake of the presidency of Barack Obama, a man who by virtue of his own skin color never had to resort to the detached tributes of white presidents.”

When he spoke at the National Museum of African American History and Culture, the museum Trump referred to in his speech, President Obama spoke, as only he could have, stating:

Yes, African Americans have felt the cold weight of shackles and the stinging lash of the field whip. But we’ve also dared to run north and sing songs from Harriet Tubman’s hymnal. We’ve buttoned up our Union Blues to join the fight for our freedom. We’ve railed against injustice for decade upon decade, a lifetime of struggle and progress and enlightenment that we see etched in Frederick Douglass’s mighty, leonine gaze.