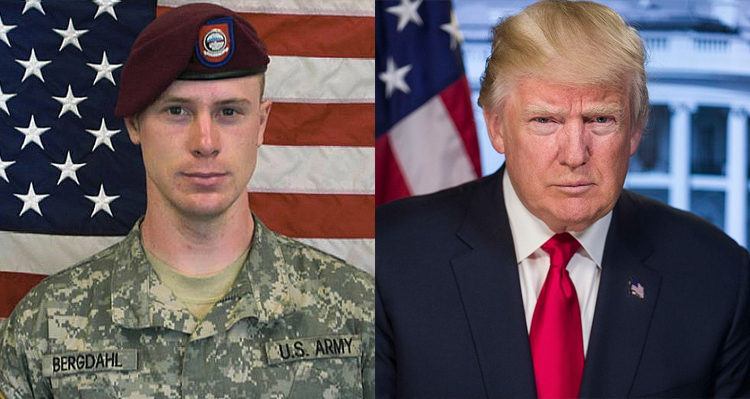 Lawyers for Bowe Bergdahl are seeking a dismissal of all charges due to Trump’s repeated inflammatory remarks about their client.

Lawyers for Army Sgt. Bowe Bergdahl argued for a dismissal for their client during a Monday pretrial hearing, arguing that repeated highly inflammatory remarks by Trump have denied him the right to a fair trial.

CNN reports that: “The defense, led by Eugene Fidell, played pieces of a 28-minute video in which Trump repeatedly refers to Bergdahl as a “traitor.” They claim that “Trump’s statements are prejudicial to Sergeant Bergdahl’s right to a fair trial,” according to the motion filed last month. Their main argument was that Trump’s comments constituted “unlawful command influence,” (UCI) which would make it impossible for Bergdahl to receive a fair trial because the commander in chief has disparaged him multiple times.

A report by NBC News adds that “The defense’s motion, filed shortly after Trump was sworn in as president, cites more than 40 instances of Trump’s criticism at public appearances and media interviews through August 2016.”

The judge, Army Col. Jeffery R. Nance, did not immediately rule on the case, but called the video “disturbing material.”

Military newspaper Stars and Stripes reports that: Nance “was especially concerned about Trump’s 2015 pledge to review the case if he was elected president. Such a comment has the potential to put a ‘black eye’ on the public’s confidence in the court-martial process, Nance said after defense attorneys played a video containing the statement in the courtroom during the pre-trial hearing.”

Stars and Stripes continued their report, noting that: “Nance must determine whether some 60 derogatory comments made by Trump between June 2014 and August 2016, such as calling Bergdahl ‘a dirty, rotten traitor’ and opining he should be executed or dropped from an airplane to the Islamic State group, impacted the soldier’s right to a fair trial.”

The Washington Post reports that: “Even though Trump repeatedly suggested that Bergdahl should face stiff punishment, including being thrown out of a plane, prosecutors said in a court filing last week that any reasonable observer would understand that comments by the then-Republican contender amounted to campaign rhetoric and should not be taken literally.”

“With regards to Mr. Trump’s comments that SGT Bergdahl is a ‘traitor’ or committed ‘treason,’ such comments were clearly intended to be understood by their colloquial meaning,” the prosecutors wrote in their response to the defense motion, adding: “It strains credulity to believe that Mr. Trump was seriously suggesting that SGT. Bergdahl should be thrown out of an airplane.”

The Washington Post added that: “Eric Carpenter, a former Army lawyer who teaches law at Florida International University, said that potential military jurors could be influenced by Trump’s comments even if he made them before becoming president.”

“The prosecution is in a tough spot. These statements are really indefensible, and they have the job of defending them,” he said, adding that: “No one in the administration has disavowed those comments, so the comments still have life.”

Military law expert Greg Rinckey told Fox News that although he doubted that the judge would dismiss the case, Trump’s statement could mitigate possible punishment for Bergdahl in the event he is found guilty.

According to Fox News: “Rinckey said that while the judge is not likely to dismiss the charges, Bergdahl’s contention that a jury cannot avoid knowing about and being influenced by Trump’s condemnation may result in some time – perhaps days, or a month, for instance – deducted off his sentence if he is convicted.”

A written decision on the motion is expected soon.