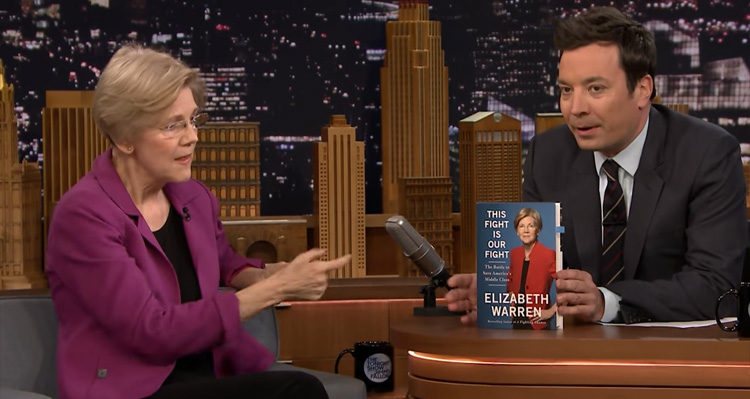 “We’ve gotta be in the fight. We cannot lay down and play dead.” Elizabeth Warren discusses protecting the middle and working classes from Trump’s policies in her debut interview with Jimmy Fallon.

Progressive firebrand Elizabeth Warren made her debut appearance on The Tonight Show Starring Jimmy Fallon, to discuss efforts to protect the middle and working classes from Trump’s regressive policies and to talk about her new book that was released on Tuesday, titled: “This Fight Is Our Fight: The Battle to Save America’s Middle Class.”

The interview began with Fallon asking Warren about the future of the Democratic Party.

“For me, it’s three things,” Warren responded. “The first one is we’ve gotta be in the fight. We cannot lay down and play dead.”

Second, “we cannot shoot at everything that moves.” Democrats must “keep a focus on what [Trump] actually does,” instead of focusing on responses to each and every one of his tweets.

“Remember in the movie Up? When the dog yells ‘Squirrel!’ We cannot all go over there,” she added. “What’s critical is to keep a focus on what [Trump has] actually done because that’s what he has to be held accountable for.”

The third key, she explained, is to promote Democratic values. “We’ve gotta talk about the reasons why we get up in the morning and what we fight for all day long and what we’re still fighting for when we go to bed at night. And that comes down to something pretty straightforward for me: we get out there and fight for opportunity. Not just for some of our kids, but we fight for opportunity for all of us. That’s what it’s about.”

After talking about the fact the Republican Senate Majority Leader Mitch McConnell refuses to speak to her, Warren talked about her book and the importance of building an activist army to combat Trump and the Republican Party’s war on the middle and working classes.