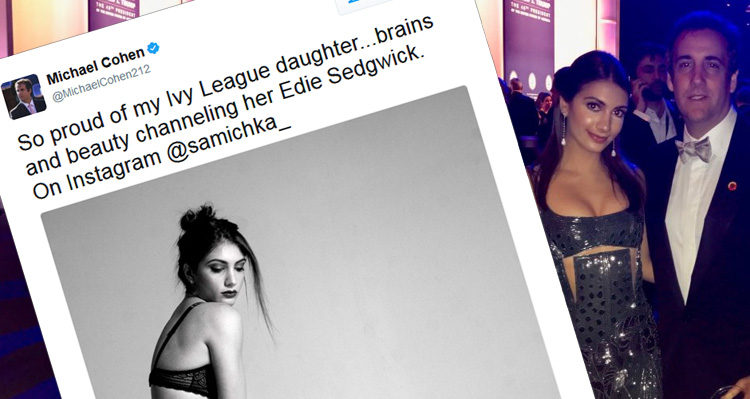 Trump’s lawyer doesn’t get why it’s creepy to post a photo of his own daughter on Twitter wearing lingerie.

Trump makes inappropriate remarks about his daughter, Pence calls his wife “mother,” and Trump’s attorney posts a risqué modeling shot of his daughter on Twitter – begging the question:

What is wrong with these people?

Trump’s personal attorney, Michael Cohen posted the photo of his daughter on Twitter Sunday, writing: “So proud of my Ivy League daughter…brains and beauty channeling her Edie Sedgwick.”

As Elle reports: “Cohen’s daughter Samantha is 21 and attends the University of Pennsylvania, the alma mater of Trump and his daughter Ivanka.”

“Hundreds of Cohen’s followers responded to tell him that posting such a sexy photo of his own progeny was inappropriate and creepy—very Trumpian behavior—and in true Trump fashion, Cohen fought back,” Elle continued.

So proud of my Ivy League daughter…brains and beauty channeling her Edie Sedgwick. On Instagram @samichka_ pic.twitter.com/mpQxhr3mh3

Twitter was quick to respond with a barrage of posts, many alluding to Trump’s inappropriate behavior and comments regarding his own daughter, Ivanka Trump.

Possibly the most damning remark coming in the form of a response to a tweet from Twitter user Bonnie Bratnober criticizing the pattern of creepy behavior regarding women coming from the Trump administration.

Another twitter user followed up, noting that Cohen’s response of “Jealous?” was possible “more creepy” than Cohen posting the photo of his daughter had been:

@MichaelCohen212 @bonibrat This type of reply might be more creepy than you posting the pic, bro.

Michael Cohen is a longtime Trump surrogate whose statements are sometimes too polarizing for even his bombastic boss to handle. During the campaign, Trump twice distanced himself from Cohen’s remarks — the first time when Cohen told the Daily Beast that legally, “you cannot [email protected] your spouse” (Cohen later apologized), and the second time when Cohen said the women accusing Trump of [email protected] assault “aren’t women he’d be attracted to.” (Trump made the same claim himself but later denied it.)

Shannon Coulter, co-founder of the website Grab Your Wallet which keeps a running list of companies supporting Trump and/or his family business to boycott, aptly pointed out to Cohen that: “Edie Sedgwick bucked social norms for women in the mid-1960’s. If you’d been her dad, you’d have been angry and terrified.”

@MichaelCohen212 Edie Sedgwick bucked social norms for women in the mid-1960's. If you'd been her dad, you'd have been angry and terrified.

@MichaelCohen212 She was an original who would have detested Donald Trump & anyone who helped or represented him. Keep her name out of your mouth.

Raw Story contributor Sarah Burris posted a photo of Trump with Ivanka in response to a tweet by Jessica Gottlieb, a noted blogger who writes about motherhood on her website We Are Midlife Motherhood.

@JessicaGottlieb I shall thank you with this photo of Ivanka Trump sitting on her dad's lap. pic.twitter.com/9taJfpsvpJ

Others responded on the inappropriate nature of posting such a photo:

@MichaelCohen212 The last time my dad posted a pic of me in lingerie was never.

And Cohen apparently followed up by blocking her on Twitter:

And our final example is of a Twitter user noting the obvious pattern of this kind of behavior: