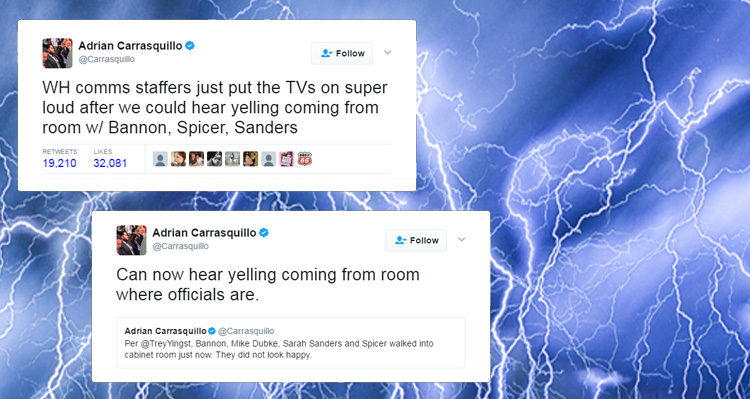 The Hill reports that “The information was provided by a U.S. partner through an intelligence-sharing arrangement. The partner did not give the United States permission to share the information with Russia.”

BuzzFeed News corroborated the Washington Post article as did The New York Times and The Wall Street Journal, reporting that:

Two US officials who were briefed on Trump’s disclosures last week confirmed to BuzzFeed News the veracity of the Washington Post report, with one noting that “it’s far worse than what has already been reported.” The official was referring to the extent of the classified intelligence information Trump disclosed to the Russian ambassador and foreign minister.

Within minutes of the Washington Post report, the Trump White House, “already in near-perpetual crisis management mode, scrambled again Monday night to respond to yet another explosive allegation,” according to a report by NBC News.

Continuing, NBC News reports that “the face of the response was National Security Advisor H.R. McMaster” who “inadvertently stepped into the center of the action” when he emerged from a West Wing doorway “to stare down a hallway of restless reporters.”

McMaster “backed away” from the reporters, “smiling” and telling them “this is the last place in the world I wanted to be” before retreating back into the West Wing, ignoring their questions.

Continuing, NBC News reports that reporters were gathering outside White House Press Secretary Spicer’s office. “A junior staffer asked reporters to clear out and head back to the briefing room, but nobody budged.”

At 6:24, an email announced the administration’s new ambassador to the Bahamas.

Ten minutes later, another email arrived. This one included statements attributed to McMaster, his deputy for strategy, Dina Powell, and Secretary of State Rex Tillerson, declaring the Post’s story to be “false” and denying that the president ever revealed intelligence sources or methods.

Six minutes later, Spicer made a hallway appearance, sending reporters scurrying back outside when he said McMaster would brief them on camera.

But McMaster’s carefully crafted statement, a half-hour later, didn’t deny what was being reported. The Post, after all, never said the president had revealed sources and methods — only classified information that could lead foreign intelligence agencies to zero in on those assets.

The handful of people lingering near the West Wing door quieted immediately, trying to listen in. Soon, the volume on the television in the press office was cranked up abnormally loud.

Can now hear yelling coming from room where officials are. https://t.co/xh8LQ0paPM

The Daily Beast reports that White House staffers were observed hiding as the chaos engulfed the West Wing:

Communications staff and senior staffers at the White House were literally “hiding in offices,” according to a senior Trump aide, as a gaggle of White House press stormed White House hallways just after the Washington Post story broke on Monday evening.

“Do not ask me about how this looks, we all know how this looks,” the senior aide told The Daily Beast on Monday evening. Trump administration officials spoke to The Daily Beast on the condition of anonymity so as to speak freely. The aide described a scene at the White House as tense and “a morgue,” where senior officials such as Sean Spicer, Sarah Huckabee Sanders, and Stephen Bannon convened to sketch an immediate path forward in handling the aftermath.

A White House aide who was walking by “deflected an inquiry” about the Washington Post article, telling reporters “I’m dealing with other dumpster fires.” and Principal Deputy Press Secretary Sarah Huckabee Sanders then emerged from the West Wing and put off reporters as well.

“We’re not answering any other questions right now, so you guys can clear this hallway,” she stated.

Asked whether McMaster or anyone else would clarify his statement, she replied: “Tonight, we are not doing any other questions. At this moment.”

Former Press Secretary Josh Earnest and former Clinton aide Neera Tanden join Ari Melber of “The Last Word with Lawrence O’Donnell” to discuss the fallout in the clip, below: