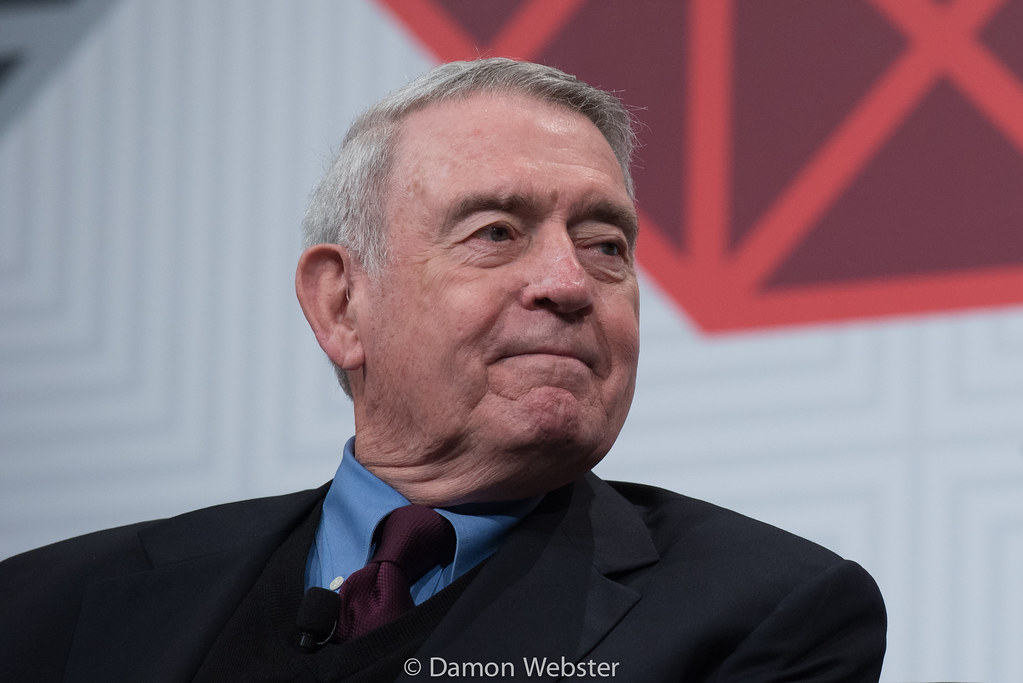 Dan Rather, best known for his 24-year tenure as anchor of ‘CBS Evening News, is no fan of Trump as evidenced by his many Facebook posts, articles and appearances on news casts.

In one of his more noteworthy Facebook posts, the legendary newscaster called out Trump last September, writing: “To call Trump a con man, as many have, is a disservice to the art of the con. By its definition a con requires deceit. But Trump has not tried to hide his lies or the sheer unrealistic audacity of his cartoonish policy positions.”

Rather has also spoken out against the media for their failure to hold Trump accountable for his many lies and failures.

Last December he warned the media not to underestimate Donald Trump, stating that although he appears to make dumb statements, he is actually quite intelligent, that all his controversial remarks are “tactical moves” designed to attract the hard-right base. Rather also remarked that Trump was “confusing the bully pulpit with the BS pulpit.”

Last September, Rather turned to his Facebook page and published – perhaps – his harshest criticism of the media. Warning that Trump “cynically plays the press corps’ deep desire for fairness to his undeserved benefit,” Rather wrote that “Fear, combined with the lure of ratings, views, clicks and profits, have hypnotized too much of the press into inaction and false equivalency for far too long.”

“Trump’s relationship with the press is at the heart of so much that is troubling about his candidacy,” he continued. “[T]oo much of the press has been cowed into inaction. This is a man who can be fact-checked into obscurity by any second grader with an Internet connection.”

This Tuesday, August 15th, Rather took to his Facebook page in the wake of Trump’s horrifying defense of Nazis and white supremacists during a surreal press conference held at Trump Tower earlier in the day that even left members of his staff stunned.

Rather begins his post, expressing what many of us have felt all along – that there is no hope that Trump will get any better:

The real Donald Trump has stood up… again.

There will be no pivot. There never was going to be.

There will be no becoming presidential. There never was going to be.

There will be no humility. No decorum. No sense of justice or empathy. There never was going to be.

We are far past the time for excuses, for anyone.

Continuing, Rather writes that unfortunately, Trump’s recent actions are “all too believable.”

In one of the most surreal and depressing presidential press conferences ever, Mr. Trump said what most people dreaded but already knew. His blatant false equivalence between Nazis and those who oppose them that he said on Saturday, that’s how he really feels – times a thousand.

With any other president this would be unbelievable. But with Mr. Trump it is all too believable. It is clear that he doesn’t consider himself to be the President of the United States of America – no matter what his official job title says. Down where he lives he is the president of his base, which includes a lot of bigots and even Nazis and members of the Klan. Not everyone who voted for him is in this category, not nearly. But they make up a large majority of his personal base.

Noting that bigots and  white supremacists are “a distinct (but frightening) minority of our nation,” Rather writes that “The vast majority of Americans are decent people of conscience. And I believe in the end this vast majority will prevail.”

The question is whether those who defend the President, or seek to normalize him or change the subject, will be seen as worse than enablers. Will they be viewed by history as sympathizers to the worst instincts of American hatred?