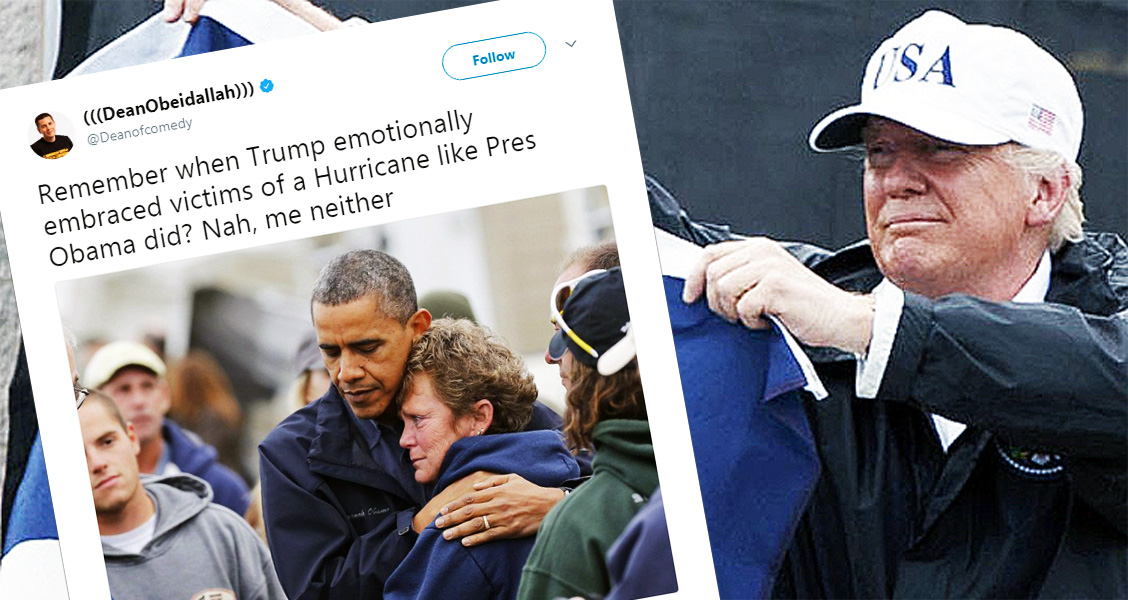 The internet lights up with rage at Trump’s inept and self-serving response to tragedy in the wake of Hurricane Harvey.

If you thought Trump couldn’t make things worse for himself after his disgusting response to the Charlottesville tragedy think again.

Twitter is firing back as Trump finds himself under fire for his initial response to Hurricane Harvey and for treating hurricane relief efforts like another one of his campaign rallies and a fundraiser for his re-election campaign.

As Huffington Post reports: “Trump used the early hours of the hurricane, and the media coverage around it, to rampage on democracy and further divide rather than unite a nation.”

He pardoned the racist former Sherif[f] Arpaio, causing enormous backlash even among some Republicans and conservative pundits for this blatant contempt for the rule of law, and even later bragged that he did it at this time for “ratings.”

He signed the order to ban any transgender people from entering the military, again something many Republicans opposed, putting fear into the hearts of so many people serving and defending this country honorably.

Trump took time out on Sunday to plug some merchandise for a long-time ally, Sheriff David Clarke, who Huffington Post aptly describes as the “Milwaukee lawman who, like Arpaio, has a long history of allegations of abuse.”

A great book by a great guy, highly recommended! https://t.co/3jbDDN8YmJ

He also tweeted on Sunday that he would be visiting Texas and Missouri, taking the time to boast of his election victory there.

“I will be going to Texas as soon as that trip can be made without causing disruption,” he began, adding: “I will also be going to a wonderful state, Missouri, that I won by a lot in ’16.”

Then there is his tragic visit to Texas on Tuesday. The New York Times reported that it was an opportunity for him to unify the country, writing: “Hurricane Harvey was the rarest of disasters to strike during the Trump presidency — a maelstrom not of Mr. Trump’s making, and one that offers him an opportunity to recapture some of the unifying power of his office he has squandered in recent weeks.”

However, as The New York Times noted in a subsequent report, he squandered that opportunity with “a few jarring, quintessentially Trumpian moments.”

At Joint Base Andrews, his wife, Melania, who accompanied him, boarded Air Force One, bound for the disaster zone, in six-inch stiletto heels that became the subject of wide comment on social media. Instead of touring shelters or visiting local residents in their homes and businesses, Mr. Trump stuck close to emergency management officials — men in uniforms — and seemed most animated when he basked in the applause of an impromptu rally outside the Corpus Christi firehouse.

A crowd of about 1,000 people, some of them cheering, greeted Mr. Trump as he left the firehouse. He grabbed a Texas flag and shouted back to the crowd, seeming to forget, for the moment, that he was at the scene of a disaster and not one of his rallies. “What a crowd!” he said. “What a turnout!”

Trump arrived in Corpus Christi wearing the white “45/USA” hat that’s available for $40 on his own website, shop.donaldjtrump.com. This marks the third time in four days that the president has worn on-sale campaign merchandise during events related to Harvey, including two previous meetings for which the White House released photographs.

Twitter was quick to respond to the controversy, hammering Trump along the way. We have included a few favorites, below.

Several individuals pointed out Trump’s efforts to promote his own merchandise:

Trump has used his Harvey meetings as product placement for hats he sells for $40 two days in a row now… pic.twitter.com/EQcPkS8Yit

One Twitter user aptly questioned why Trump wasn’t using the proceeds from his hat sales to assist hurricane relief efforts:

Hey, @RealDonaldTrump. You LOVE promoting your fucking hats so much. Why aren't the profits from these hats going to hurricane relief? pic.twitter.com/g1Nd7Fy6VO

Some Twitter users were more direct in expressing their scorn for Trump:

One Twitter user bashed Trump’s firehouse remarks regarding the size of the crowd that came to greet him, likening it to the tragic sinking of the Titanic:

What a crowd, what a turnout pic.twitter.com/7tN2zl0vAl

Another person pointed out the callous nature of Trump’s remarks in light of the loss of life:

Trump: "What a crowd. What a turnout."pic.twitter.com/BaBw0J3wwU

Last, but not least, several individuals contrasted Trump’s Texas visit, where he avoided contact with residents, to that of President Barack Obama:

Barack Obama with a victim of Hurricane Sandy. pic.twitter.com/R4AUr7INMM

We will conclude our report with the following overview by Huffington Post:

While the government itself responds with help, Trump himself responded without providing leadership or attempting to unify Americans. He only showed callous disregard, instilled fear and further divided this country as millions faced the wrath of a deadly storm.