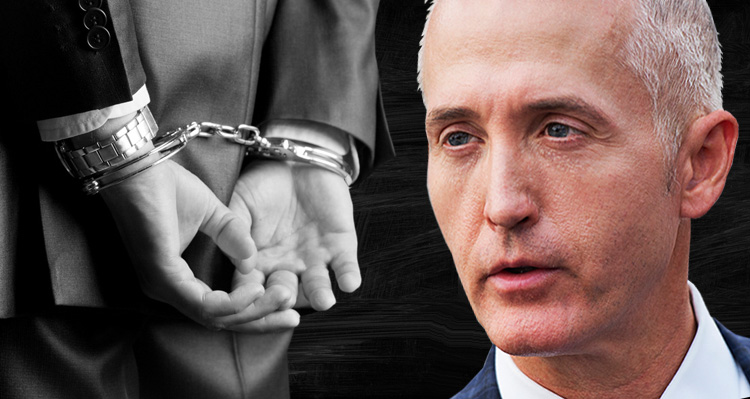 Allegations of crimes, the complete implosion of his precious Benghazi Select Committee, multiple lawsuits for defamation… The time has come to hold Trey Gowdy accountable.

The House Select Committee on Benghazi, led by Republican Trey Gowdy, all but exploded in the wake of several stunning revelations in late 2015. The CIA revealed in October 2015 that Trey Gowdy altered documents in an attempt to frame Hillary; and in November 2015, Maj. Bradley Podliska, a former investigator on the Benghazi committee staff,  filed a lawsuit against Gowdy seeking damages for defamation.

Salon elaborated on the lawsuit, reporting that, “Maj. Bradley Podliska, a former investigator on the Benghazi committee staff, claimed that he’d been improperly and illegally fired from the committee. He also revealed some damning details about the committee’s work, claiming that it had become singularly focused on Hillary Clinton and the State Department, to the exclusion of other agencies involved in the Benghazi response. According to Podliska, he’d been discriminated against for taking leave to fulfill his duties as an Air Force reservist and for resisting the committee’s intense focus on the State Department.”

It is also noteworthy that in August 2016, Fox News took the unexpected position of defending Hillary Clinton regarding a wrongful death and defamation lawsuit filed by the parents of two Americans who were killed in the 2012 terrorist attacks in Benghazi. Fox News correspondent and law school graduate Gregg Jarrett defended Clinton in an article published by Fox News that stated that “the wrongful death cause of action is legally fallacious. Pure fiction.” He went on to write that the “defamation cause of action is really quite delusional” and warned that the parents could “get hit with sanctions for bringing a frivolous lawsuit.”

Gowdy’s uncompromising Benghazi witch hunt is illegal, unlawful, and demands accountability – hopefully in the form of  a lengthy prison term.

Below is but a sampling of his misdeeds.

As Liberals Unite reported in Octobe2 2015: in a bombshell revelation, the Central Intelligence Agency reached out to Democrats serving on the Select Committee on Benghazi on Saturday to confirm that Chairman Trey Gowdy had altered documents provided to the committee by Hillary Clinton.

Kurt Eichenwald put it best when he wrote for Newsweek that:

The historical significance of this moment can hardly be overstated, and it seems many Republicans, Democrats and members of the media don’t fully understand the magnitude of what is taking place. The awesome power of government—one that allows officials to pore through almost anything they demand and compel anyone to talk or suffer the shame of taking the Fifth Amendment — has been unleashed for purely political purposes. It is impossible to review what the Benghazi committee has done as anything other than taxpayer-funded political research of the opposing party’s leading candidate for president. Comparisons from America’s past are rare. Richard Nixon’s attempts to use the IRS to investigate his perceived enemies come to mind. So does Senator Joseph McCarthy’s red-baiting during the 1950s, with reckless accusations of treason leveled at members of the State Department, military generals and even the secretary of the Army. [emphasis added]