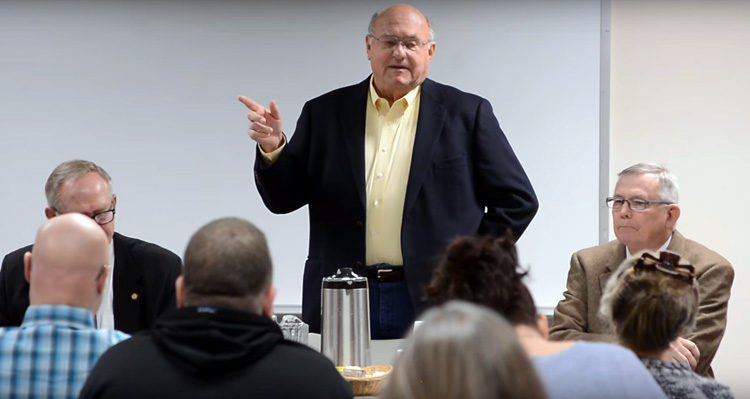 Kansas Republican apologizes for saying that African-Americans have a genetic predisposition to abusing drugs.

When Zach Worf, president of the Finney County Democrats, argued that legalizing marijuana could be a financial boon to cash-strapped Kansas, Alford told him he should look to the 1930s, the latter part of the prohibition era, for a history lesson. Alford said that a reason for the tightening grip on potential intoxicants at that time was to shield Americans from the consequences of drug abuse by “African Americans.”

“Basically any way you say it, marijuana is an entry drug into the higher drugs,” Alford stated. “What you really need to do is go back in the ’30s, when they outlawed all types of drugs in Kansas (and) across the United States.”

“What was the reason why they did that?” he continued, adding: “One of the reasons why, I hate to say it, was that the African Americans, they were basically users and they basically responded the worst off to those drugs just because of their character makeup, their genetics and that. And so basically what we’re trying to do is we’re trying to do a complete reverse with people not remembering what has happened in the past.”

The Topeka Capital-Journal reported that Alford “later apologized amid a firestorm of criticism.”

“I was wrong, I regret my comments and I sincerely apologize to anyone whom I have hurt,” Alford said in a statement.

Time Magazine reported that: “Prior to his apology Monday, when the Telegram asked for clarification regarding his comments, Alford stood by his initial stance but said that he shouldn’t have singled out African-Americans.”

“There are certain groups of people, their genetics, the way their makeup is, the chemicals will affect them differently,” Alford told The Garden City Telegram, adding: “That’s what I should have said was drugs affect people differently instead of being more specific.”

The Topeka Capital-Journal also reported that: “Alford’s peers in the Legislature were appalled a member of the Legislature voiced raw stereotyping. House leaders said they were ‘taken aback’ and ‘disappointed’ by Alford’s comment, promising to review the event.”

“I think that is outrageous,” said Sen. Oletha Faust-Goudeau, D-Wichita. “For a sitting state representative to say that, I just can’t believe it. You can’t put everybody into one category. He should be more of a statesman and get facts.”

Sen. David Haley, a Democrat from Kansas City, Kan., and relative of author Alex Haley, said the type of commentary attributed to Alford reflected prejudices held by Americans for hundreds of years.

“Unfounded stereotypes have been the basis of racist and gender discrimination from inception of our country,” Haley said. “Unfounded statements that refer to race are an indictment of small minds.”

Former Wichita Mayor Carl Brewer, who is seeking the Democratic Party’s nomination for governor, said in a statement that the type of ignorance reflected in Alford’s statements had festered in Topeka for too long.

“It is hard to believe that in 2018, anyone would support the discredited and racist policies of the Jim Crow era,” Brewer said. “No matter one’s feelings on medical marijuana and marijuana legalization, we can all agree that views like those of Kansas Rep. Alford have no place in our Statehouse, in our state or in our country.”