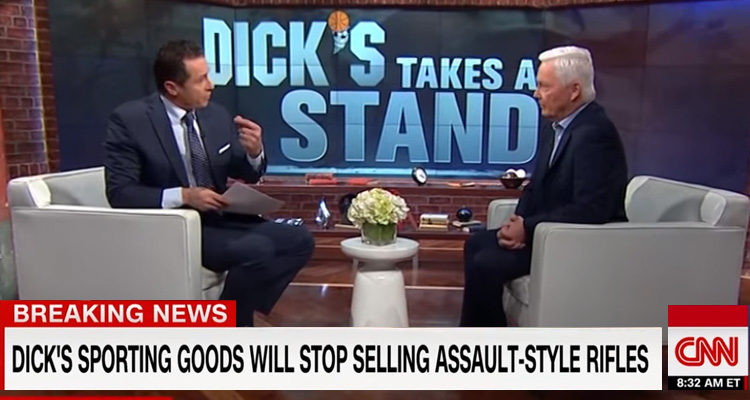 Dick’s Sporting Goods, one of the country’s largest sporting goods retailers, announces a ban on assault rifles and other restrictions on the purchase of firearms at its stores.

NBC News reported that Dick’s Sporting Goods is enacting a ban on the sale of assault rifles along with other restrictions at their stores.

The chain will stop selling assault-style rifles, end the sale of firearms to buyers under 21 (up from federal minimum age of 18), stop selling high-capacity magazines and continue to never sell controversial bump stocks, the company said.

The company made the announcement on their Twitter page and posted a press release on the company’s website.

At the same time, we implore our elected officials to enact common sense gun reform and pass the following regulations: https://t.co/J4OcB6XJnu pic.twitter.com/VUuFKkyk6c

Continuing, the press release stated that:

We have tremendous respect and admiration for the students organizing and making their voices heard regarding gun violence in schools and elsewhere in our country.

We support and respect the Second Amendment, and we recognize and appreciate that the vast majority of gun owners in this country are responsible, law-abiding citizens. But we have to help solve the problem that’s in front of us. Gun violence is an epidemic that’s taking the lives of too many people, including the brightest hope for the future of America – our kids.

Writing that: “We believe it’s time to do something about it,” the company announced the following firearms restrictions, “beginning today:”

The company went on to “implore our elected officials to enact common sense gun reform and pass the following regulations:”

In the video, below, you can watch “Dick’s Sporting Goods CEO Edward Stack talk to CNN’s Chris Cuomo about his company’s decision to raise the age requirement for firearm sales and stop selling assault-style rifles in the wake of the Parkland, Florida school shooting.