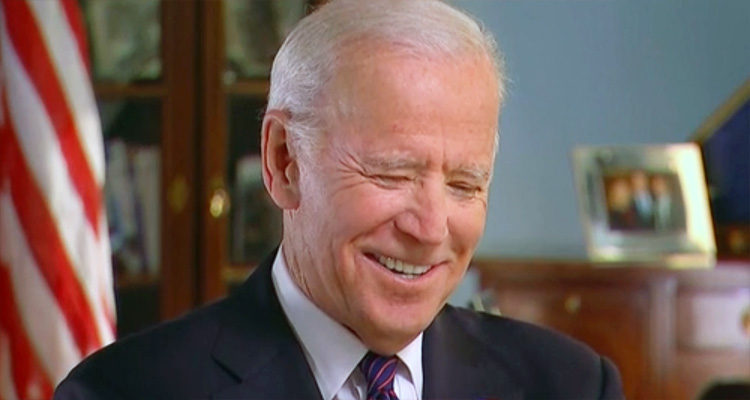 Joe Biden cannot keep a straight face when asked what he thinks about the White House.

Former Vice President Joe Biden has not been bashful when it comes to what he thinks about Donald Trump and his administration.

Last November (2017), Biden called Trump a “charlatan,” going on to characterize his America-first mentality as “closed and clannish,” defined by “ideological incoherence, inconsistent and erratic decision-making.”

Less than a week later, Biden took to his Twitter account railing against the regressive Trump regime in the wake of sweeping election victories by Democrats in Virginia and elsewhere throughout the country.

Most recently, Biden was speaking out about Trump in interviews this week.

On Tuesday, Biden called Trump “a joke” during an interview with CNN’s Chris Cuomo.

Asked by Cuomo whether or not he thought Trump should sit down for an interview with Special Prosecutor Robert Mueller’s team, Biden responded that were he his lawyer he would not advise him to do so.

“If I were the president’s lawyer I’d probably tell him not to sit down with Special Counsel Mueller,” he remarked. Asked why, he responded: “Because the president has some difficulty with precision.”

Cuomo responded: “that’s one of the most subtle things I’ve ever heard you say.”

Continuing, Biden told Cuomo: “One of the things that I would worry about—if I were his lawyer—is him saying something that was as simply not true without him even planning to be disingenuous.”

“Do you think he has that little control over whether he tells the truth or not?” Cuomo asked.

Biden concluded the interview telling Cuomo: “I just marvel at some of the things he says and does. Like – what? – two days ago he said that anyone who didn’t stand up for him was un-American and maybe even treasonous?”

Cuomo responded that the White House “said it was tongue-in-cheek. The Democrats can’t take a joke.”

Mitchell asked: “How do you explain his access to the president of the United States and the chief of staff describing him as a ‘man of personal integrity?'”

“I can’t explain it,” Biden responded. “It’s long past due that he left. I understand that he’s departed. If you just look at it from the perspective of just one thing. The FBI didn’t think he should get a security clearance, a permanent security clearance.”

Mitchell responded: “They had to know that.”

Biden answered: “Sure they knew that and they still didn’t. Look, the culture is changing, thank God, but not fast enough. And the idea that this would happen in the Oval Office. Now I don’t know, but the way I was briefed on the way the president found out about it and he said ‘go.’ So, if that’s the case – if the president never knew about it, good for the president for saying that.”

Mitchell cut in asking: “How does he not know that one of his closest advisers did not have a top security clearance? What does this say about the president and this White House?”