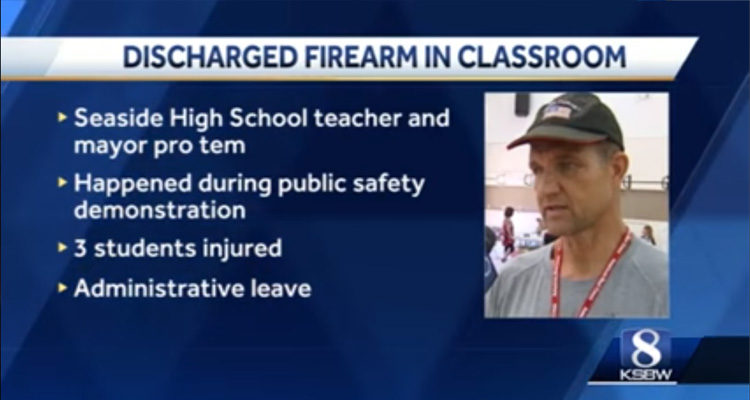 A California high school teacher, who also serves as a reserve police officer, has been placed on suspension after injuring three students.

Dennis Alexander was teaching a course about gun safety for his Administration of Justice class when his gun went off at 1:20 p.m.

Alexander was pointing his gun at the ceiling when it fired. Pieces of the ceiling fell to the ground.

A news release from the Seaside Police Department said no one suffered “serious injuries.” One 17-year-old boy suffered moderate injuries when fragments from the bullet ricocheted off the ceiling and lodged into his neck, the student’s father, Fermin Gonzales, told KSBW.

The Mercury News elaborated on the incident, reporting that:

Three students were injured, including a 17-year-old boy who was hit in the neck by debris or a fragment after the bullet ricocheted off the ceiling, said Seaside police Chief Abdul D. Pridgen. The boy was not seriously injured and classes resumed, the Herald reported.

The shooting occurs amid intense debate over whether to arm teachers in the wake of the Parkland, Fla. shooting that left 17 dead and another 17 injured. On Wednesday, students across the country are set to walk out of their classrooms to raise awareness about gun violence and safety.

The Monterey Herald added the following information regarding the shooting:

Alexander has taught the course in the past but Pridgen said he doesn’t know if he’d ever brought a live firearm to the school before. An investigation is ongoing and Pridgen said the police department will handle the situation like any other investigation.

“We’re looking into any violation of city ordinance or the penal code and we’ll determine whether or not there are any applicable charges,” Pridgen said.

An email was sent out by the Monterey Peninsula Unified School District to the parents, stating: “Upon learning of the incident, our Human Resources department, school site administration and the Seaside Police Department immediately began investigating the incident, including interviewing students in the class.”

The letter also stated that the school district is unable to share any other details other than Alexander has been placed on administrative leave for the duration of the on-going investigation.

Reporting on Alexander’s status, the New York Post noted that teachers are not allowed to possess guns in California schools and reported that Alexander “was placed on administrative leave at Seaside High School and at the police force as the investigation is conducted.”

He has apologized for the incident according to KSBW.