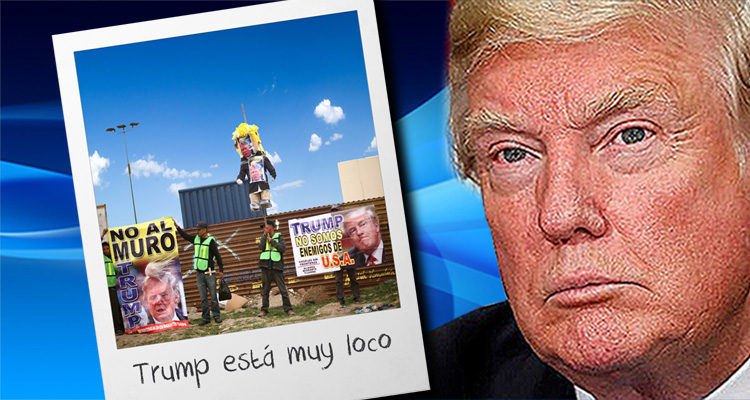 Mexican residents living in the shadow of eight prototypes of Trump’s planned border wall laugh at the idea that it will do anything to stop desperate immigrants from crossing the border.

NBC News reported that Trump “examined eight recently constructed prototypes for the wall near the U.S.-Mexico border” on Tuesday during his first visit to California since taking the oath of office to, as he put it, “pick the right one.”

However, as Reuters reported: “Mexican residents of a poor Tijuana slum in the shadow of eight prototypes of Trump’s planned border wall called the project a waste of money and laughed at the idea the monolithic slabs will stop desperate immigrants.”

“The size of these walls is not going to matter,” said Rogelio Perez, 48, who lives in the trash-strewn sprawl of cinderblock homes and makeshift huts grouped around a lot for abandoned cars, in sight of the 30-foot (9 meter)-high concrete and steel models.

“I even think they’ll try to cross with those pole vaults that they use in the Olympics,” he said.

One eight-year old girl pointed without hesitation to a steel-like structure capped in a narrow brown cylinder, saying Trump should pick that model, because it would be the least likely to stop an immigrant.

“The coffee-colored one,” she said. “It’s the easiest to throw an anchor up and pull yourself over.”

Continuing, Reuters also reported on the Mexican residents’ reaction to the idea of Trump’s wall in general. As expected, “In the scrappy Rancho Escondido neighborhood on the Mexican side, protesters shouted over the line ‘we won’t pay for your wall.'”

“I don’t understand how in this day and age they are doing this,” said Perez. “The Berlin Wall came down, and here it seems that they are building it again.”

Salome Pacheco [the mother of the eight-year-old quoted above] said migrants would find ways to tunnel through, or resort to sea crossings to get into the United States.

“The wall is just a waste of money. People will continue to cross, here, there, and everywhere.”

Meanwhile, residents of both sides of the border have been pushing back.

Next door in Arizona, locals have been pushing back for nearly 40 years by using the U.S.-Mexico border fence as a giant volleyball net.

Then, there are the unintended consequences if Trump’s wall is built.

Last April, CNN reported that Trump supporters in Texas discover that the joke is on them, because they will end up living in Mexico if Trump’s wall is built.

Raw Story elaborated, reporting that: “Trump supporters in Texas are coming to the realization that their vote for the president may force some of them out of their homes for less than they are worth, with others finding out that — if they stay — they’ll be living in Mexico if his wall is built.”

As an ironic footnote, Huffington Post reported that: “Within hours of Trump’s visit, federal authorities were charging three rural Illinois men ― one of whom was a bidder on Trump’s border wall contract ― for the bombing of a Minnesota mosque last year and the attempted bombing of a women’s health clinic in Illinois.”