" /> Jimmy Kimmel Destroys Sean Hannity - 'If I'm An Assclown - You, Sean, Are The Whole AssCircus' - Video 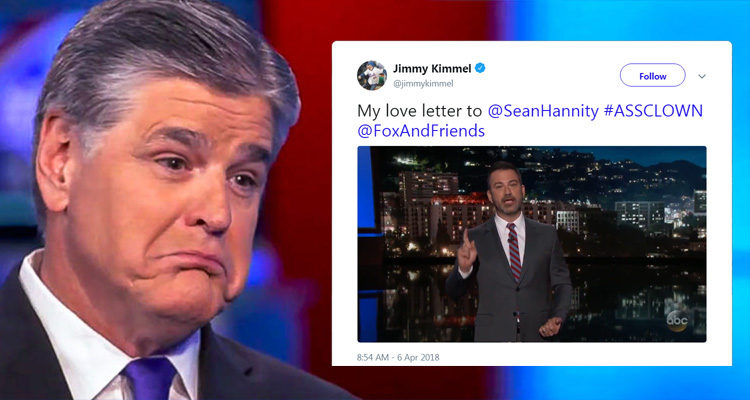 Sean Hannity hasn’t learned that you never go to war with a comedian over bits they do on the air.

The New York Times reported that: “Since taking up the cause of public health care last year, Jimmy Kimmel has become a favorite punching bag of the conservative commentators on Fox News.”

Fox’s Sean Hannity dressed Kimmel down on Thursday for making fun of Melania Trump’s Slovenian accent in a monologue earlier this week. Hannity unloaded a fusillade of unfriendly terms describing Kimmel, calling him a “despicable disgrace” and an “ass clown.”

“This is brutal. Liberal Jimmy Kimmel making fun of the First Lady of the United States and her involvement in the White House Easter Egg Roll, even her accent. Jimmy, you’re a despicable disgrace,”Hannity began, later adding: ““What a disgrace. Mr. Kimmel, that’s her fifth language. How many do you speak?”

Kimmel shot back Thursday night on his program.

“What even is an ass clown?” Kimmel asked during his monologue. “I was thinking about it this morning. Is it an ass that’s a clown? Or is it a clown that actually lives in an ass, like a little bozo bird in your butt cheeks? I honestly don’t know. And more importantly, why is Sean Hannity openly fantasizing about clowns in the ass?”

Continuing, he added: “This is the guy who defended the multiply alleged pedophile Roy Moore, and I’m a ‘despicable disgrace.’ I’m the ‘ass clown.’ If I’m an ass clown — and I might very well be — you, Sean, are the whole ass circus. You’re the juggler, the trapeze artist. You are the ass-lion-tamer and the ass-human-cannonball all jammed into one little car. You are the Barnum and Bailey of ass-clownsmanship, but I do want to say I appreciate how compassionate you’ve suddenly become to the plight of immigrants in this country in the last 24-hours. Do you know what I think is disrespectful of the first lady? Cheating on her with a porn star after she has a baby. Why don’t you rant a little about that, Sean Hannity?”

You can watch Kimmel in action below.

Hannity continued his attack on Twitter, accusing Kimmel of behaving like Harvey Weinstein, the now-disgraced film producer who was fired from his own company and expelled from the Academy of Motion Picture Arts and Sciences after more than 80 women made sexual abuse allegations.

This is ABC’s @jimmykimmel aka Harvey Weinstein Jr. Asking 18 year old girls to grab his crotch and “put their mouth on it”. Jimmy that’s you being a pervert asshole. How would you feel if that was your daughter? I bet @Disney is so proud. https://t.co/o7ydG72Pzc

Ten minutes later he lashed out a Kimmel, once again, for his on-air remarks about Melania Trump.

Also @jimmykimmel attacking @MELANIATRUMP while reading a book to kids? What happened to “Mr Morality”? Attacking a woman who is helping children? This is @Disney? #pervertkimmel https://t.co/o7ydG72Pzc

Hannity posted another one a few minutes later:

And Kimmel responded that he couldn’t wait for more after Hannity posted one more tweet before bedtime:

Game on….. Oh ask the boss @Disney Bob about the conversation we had about you. Best Sean #pervertkimmel https://t.co/9W04t4J8Ak

There’ nothing quite like the maturity level going on at Fox News these days; and, as a friend posted on Facebook: “Oh Hannity, you perfectly designed imbecile, this is where you get all the rope you like. Just FYI, never go to war with a comedian over bits they do on air.”