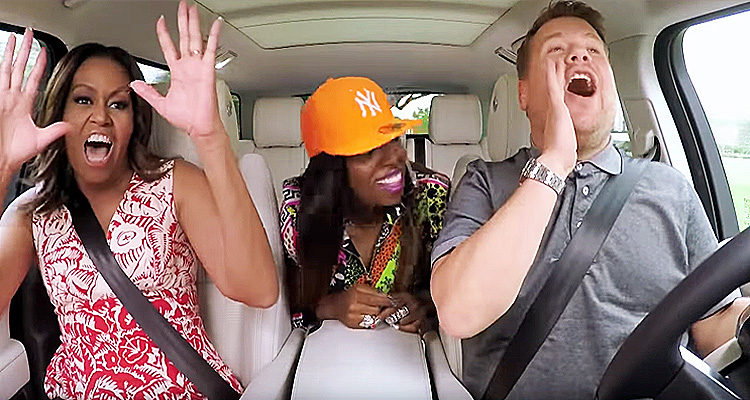 This video of Michelle Obama doing carpool karaoke is killing me!

Michelle admitted to Corden that this was one of the only times she had the opportunity to rock out in a car.

“I’ve been in a car maybe months ago with my daughter who learned to drive, and we rocked out with her. But that was the only time in seven and a half years that I’ve been in the passenger seat, listening to music, rocking out like this.”

The Atlantic provided some background for the clip the day after its release, reporting:

The first song they sing along to is Stevie Wonder’s “Signed, Sealed, Delivered, I’m Yours,” which has the dual virtues of being by Michelle’s favorite musician and of reminding the public of the heady 2008 campaign where it frequently played as Barack’s walk-off music. Next, Beyoncé’s “Single Ladies” gives the first lady a chance to flaunt her hipness with effortlessly on-beat hand twists and a Lemonade joke.

Then comes “This Is for My Girls,” the charity single Michelle commissioned to feature a host of famous women including Kelly Clarkson, Janelle Monáe, and Missy Elliott—who, poof, appears backseat to rap her verse. The song, meant to promote the first lady’s Let Girls Learn initiative, grabbed headlines when it was first released.

Continuing, the three of them go old school, rapping to Missy Elliott’s “Get Ur Freak On.”

You can watch the fun, below: